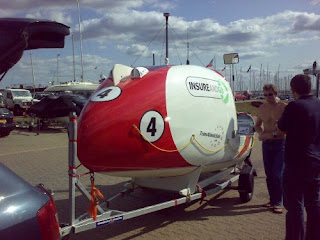 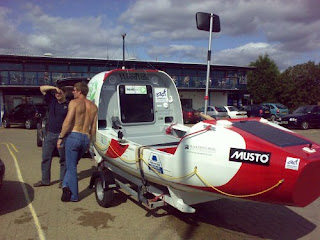 I’m always on the lookout for ‘different’ boats, particularly sailing boats. While enjoying a sunny walk at Burnham-on-Crouch, I happened to arrive at the Marina, where I saw a very strange boat. Standing beside this odd vessel there were two fellows chatting about racing yachts. I half listened to their enthusiastic chatter, while automatically photographing details of the boat. Despite the fact that my mobile phone camera wouldn’t do it justice, I continued clicking away while berating myself for not remembering my Sony digital camera.

The more I examined the boat, the more I realised I was looking at something very special. She was not a sailing boat, but an unusual, purpose-built rowing boat. She was not a sleek rowing machine, as a streamlined single sculling boat; instead she had a very large fore cabin resembling the body of a gigantic ladybird. Adjoined to the cabin was a cockpit with little freeboard, where the crew could sit on a sliding seat when rowing. Lastly there was a streamlined, aft cabin, presumably for stores. Obviously, she was an ocean-going craft, and appropriately, she was painted in bright red and white for high visibility. I noticed the boat’s name, ‘TransAtlanticSolo’.

Immediately, I knew what this was about. She would be used in the Woodvale Challenge Race across the Atlantic from La Gomera to Antigua, starting this December. A few words with the owner, Charlie Pritchard, confirmed my belief. I remarked that the huge fore cabin would act as a sail when running with the trade winds. Unlike other ocean rowing boats, her small cabin was at the stern. I believe Charlie will sleep in the fore cabin. All this makes sense, even when riding to a parachute anchor during a storm, because of the additional buoyancy at the bow and protection provided to the rower, if he should need to be in the cockpit. There would be an advantage when running obliquely downwind, because there would be less of tendency to gripe. I am not clear how ‘TransAtlanticSolo’ will be steered, because she doesn’t appear to have a rudder. Steering by oars alone could place an extra burden on the rower, because of having to compensate by pulling harder on the leeward side.

Charlie is no ordinary person, because he has a huge appetite for competitive adventure and a proven track record in sailing and running. Besides competing in the Marathon des Sables, a 150 mile desert running race, he has been highly involved with the America's Cup, Admiral's Cup, Whitbread and Olympic yachting campaigns. He is under no illusion about the enormity of the task of rowing 3,000 miles in approximately 70 days - almost 43 miles a day. Entirely alone, he will have to cope with all the ocean throws at him, and in between, row, row, row, sleep and eat when he can. His motivation is not fame. Instead, he rows the Atlantic to pay a tribute to a very special friend by the name of Sean, who after a brave and arduous fight, succumbed to renal failure. For that reason, Charlie hopes to raise £100,000 towards a new renal unit at Addenbrookes Children’s Hospital.

Here are a few links for you to learn more about Charlie and to give him your support.