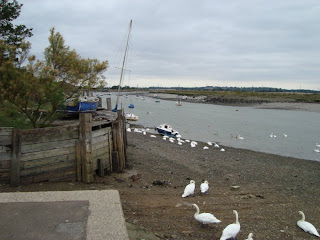 
Mute Swans can be found almost anywhere in the British Isles, with the exception of the more rugged parts of Scotland, central Wales and the moors of South West England. They are usually tolerant of humans, except when breeding, being especially protective of their young. When nesting they are highly territorial, and I remember witnessing a ferocious attack by one swan when another entered its territory. The attacker remorselessly bit the neck of the intruder until the retreating bird climbed the canal bank into a bramble bush.

Soon after I built my first boat, an 11 foot canvas canoe, I was paddling her on the River Tone when a swan flew directly towards me, and my only defence was to fend off with my paddle, but just short of hitting me with its beak, the bird applied the brakes. Maintaining an aggressive stance with wings arched, it made hissing noises and followed me for several minutes until I got away. I later heard that a canoeist at the same spot had capsized and drowned while being attacked by a swan. Since that time I have always been wary of Mute Swans, but apart from the occasional hissing, I’ve never been attacked again while boating.

At Hullbridge there’s a large colony of Mute Swans, and one pair has five cygnets, which are always well guarded by the adults who keep them on the fringes of the flock. Parents and Grandparents bring children to see and feed the birds with bread. If they knew better, they would not do it, because swans naturally eat water plants, insects and snails. The Hullbridge swans congregate at the slipways either side of the River where they are most likely to be fed by visitors.

The Hullbridge colony is large, but the largest of approximately 850 Mute Swans is at Abbotsbury, in Dorset. I believe this is the only managed swannery in the UK. The Fleet Lagoon where the swans congregate is uniquely sheltered by Chesil Beach and it has been a haven for swans for at least 600 years. Benedictine Monks of St Peter’s Monastery ate the swans as a ready source of meat. At the dissolution of the Monastery by King Henry VIII, the Strangways family took over the management of the Swannery and successive generations have maintained it. King Henry also made a law that the owners of swans were to mark their cygnets by making nicks on their beaks, and any unmarked birds would become Crown property. To this day, Mute Swans are ‘Royal’ birds, and as such, they are protected by law; offenders may be fined up to £5,000, and even be imprisoned!
Posted by William Serjeant at 10:26 am