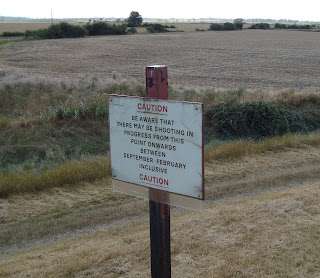 I can go along with hunting, if it is necessary for survival, but as a sport, purely for the kill, I find that hard to stomach. While on a recent walk beside the River Crouch I noticed a sign which warned that shooting could take place between September and February. As I continued my walk I gave little thought to what I had read, but when I reached my destination where there’s a pond, I suddenly realized I was not alone. Under a tree beside the pond there was a man dressed in a camouflaged outfit. He was deploying decoy ducks by throwing them into the pond after having attached retrieval lines. These were not any old decoys, because they were of different shapes and sizes. I recognised replica Mallards, but there could have been Shelducks, Teal or Shovelers. This man was setting lures to attract ducks so that he could kill them. His retriever dog was well-behaved and quiet. He had set up a camouflage net in the bushes to conceal his presence from unsuspecting birds.

I believe he sensed I was not happy with what he was doing. I stood and watched from the river bank, but not wishing to confront him, because what he was doing was perfectly legal, and I was an intruder into his domain, I took my leave. I reasoned he had every right to engage in his ‘sport’, as I do mine (sailing). He probably spends as much or maybe more than I do on having fun, and he may be more passionate about his hobby than I am mine.

To learn more about ‘wildfowling’, or ‘waterfowling’, I did a bit of surfing on the Net. At one web site I read, ‘Of all shooting sports, wildfowling is the most arduous, the most romantic and the loneliest. It is also the branch of shooting in which the newcomer has most to learn - in terms of safety, quarry identification, marsh craft and ethics.’ Maybe it could be arduous if travelling to a remote location, but ‘romantic’, that does no seem likely; loneliness, possibly. ‘Ethics’ – yes, he could learn a lot about the rights and wrongs of shooting wild animals. From others I discovered there are hundreds of people cashing-in on duck shooting. The duck fowler has to have a suitable shotgun that can cost anything from £90.00 to £5,000, depending on the make and the type, new or second-hand. To keep warm and dry he will need a camouflage outfit, including boots, headgear, gloves and possibly gaiters. For the storing his cartridges he may have a special belt. Don’t forget his retriever dog and the animal’s training. He may even want to set up a special tent (hide) beforehand, so that the birds can become familiar with it.

I was somewhat surprised to discover there are very few anti-duck shooting lobbyists. The most visible is the Coalition against Duck Shooting, in Australia. ( http://www.duck.org.au/) I was upset when I watched a YouTube video showing two young men shooting ducks and swans with apparent glee. They were proud of their expertise at handling what appeared to be semi-automatic shotguns, and they didn’t want to put an injured duck out of its misery after being wounded. This is the sort of behaviour that gives wildfowling a bad name. On the other hand, there are very expert and professional providers of organized duck shooting parties; they even arrange accommodation and employ chefs to prepare and cook birds shot by the wildfowlers.
Posted by William Serjeant at 5:54 pm