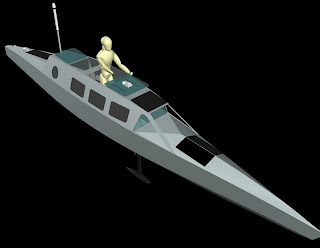 When you consider what Greg Kolodziejzyk has achieved during his lifetime, you will conclude that he is quite exceptional. Retired from being a successful business entrepreneur in his mid-30s he turned to competitive athletics to improve his health. Altogether he completed 12 Ironman triathlons, gaining 4th place in his division of the 2006 Arizona Ironman triathlon, which qualified him to compete in the World Championships at Kona, Hawaii. In the summer of the same year he pedalled his streamlined bicycle, Critical Power, 247 miles in 24 hours to earn his first world record. He then set his sights on the 24 hour distance record for a human-powered vessel on water, and in 2008 he pedalled a super-lightweight trimaran a distance of 152.33 miles to break Carter Johnson’s record when he paddled a kayak 150.34 miles.

Greg now wants to establish a world speed record for pedalling a propeller powered vessel from Vancouver to Hawaii. Meanwhile he is keeping himself fit by running ultra-marathons, and with the help of the designer of his boat he has almost finished building her. ‘WITHIN’ is a large pedal-powered canoe with a small keel and a cabin. He wants to start the 4,500 kilometres voyage in June, 2010, and he hopes to complete it in less than 80 days, and if possible, half that time.
http://www.adventuresofgreg.com/
http://www.pedaltheocean.com/
Posted by William Serjeant at 8:34 am