The Evolution of Sailing Craft 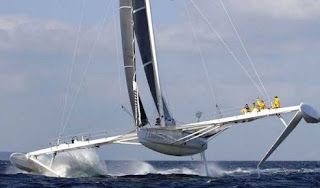 I’ve been doing a personal study looking into the evolution of sailing craft. The research has been fascinating. If you’ve read the Creation story as portrayed in the Bible and onwards to the time of the Universal Flood, you’ll note there is no mention of any boat until you come to Noah’s ark. Now, the ark was not a sailing vessel, although with her high sides she would have drifted in the wind. Many people doubt the Flood ever took place, and those who do are divided on when it happened. Some say as far ago as 5000 BC, but the authors of Creation Magazine believe it was around 2304 BC.

What fascinates me is the way in which changing technologies have made possible what was impossible for the early offspring of Adam and the offspring of Noah. Because the Bible doesn’t mention boats before the time of Noah, there is no reason to suppose that man didn’t build and use them. The earliest of vessels could have been made with very few tools. In fact, a reed boat large enough for a man to float on could have been bundled and lashed together without tools. Ancient Egyptian paintings and decorated pottery portray sailing reed craft, such as a replica built by Thor Heyerdahl in 1970 in which he sailed across the Atlantic to prove his theory that ancient civilizations could have colonized the Americas from Northern Africa.

The progression of technology through the use of natural materials and synthetic ones is indeed fascinating. We know that a wooden ship of 95 tons was discovered in the tomb of Pharaoh Khufu. This magnificent double-ended craft for use on the River Nile had cedar planking joined by the use of mortise-and-tenon joints which were covered with half-round battens inside and out, all held in together with continuous stitching. In fact this boat could have been dismantled and reassembled elsewhere; such was the sophistication of the design. Procopius tells of Dhows in the 6th century that had planking held together with cross-stitching. They were so well built that they did not require any form of outer covering to keep them watertight.

Later, in approximately 1000 AD, Leif Ericson with his crew, rowed and sailed across the North Atlantic form Norway to Newfoundland in a clinker Viking boat. Such vessels were built with overlapping planks held together with wooden dowels or iron nails and roves. The Iron Age had arrived in Northern Europe. Big advances were made when iron tools such as adzes and saws became available. Hardwoods such as oak and ash were used when building large sailing vessels such as Christopher Columbus’s ‘Santa-Maria’ and Ferdinand Magellan’s ‘Victoria’, which was the first boat to do a complete circumnavigation. By the time of Izambard Kingdom Brunel, large ships were being built from iron plating held together with rivets. In 1837 his ‘The Great Britain’, equipped with sails, but fitted with steam engines, was the first propeller driven vessel to cross the Atlantic. The ‘Cutty Sark’ was uniquely built with wrought iron frames supporting a wooden hull. In more recent times, cold and hot-moulded (plywood) vessels were used during the 2nd World War. Aluminium, fibreglass and Ferro-cement became widely used materials. Foam sandwich, carbon fibre, Kevlar and very strong, but light, high-tech materials profoundly changed the shape of the modern sailing boat. Ellen MacArthur’s ‘B&Q/Castorama’, a large trimaran in which she smashed the world record for a solo circumnavigation, is one such vessel. Without the use of these Aerospace materials it would not have been possible for the hydrofoil trimaran ‘L’Hydroptere’ to gain the world speed record over a distance of one mile. She averaged an astonishing speed of 48.7 knots. ‘Banque Populare’, a 131 ft trimaran, in 2008 sailed 2,880 miles across the Atlantic in 3 days 15 hours at an average speed of 32.94 knots. Sailing vessels of the future will incorporate these new materials and be built with the necessary processes, machinery and equipment. In view of the need for reducing carbon emissions, large cargo ships of the future may well resort to wind energy, but instead of deck mounted sails they will fly enormous kites to harness the power of the wind.
Posted by William Serjeant at 4:15 pm