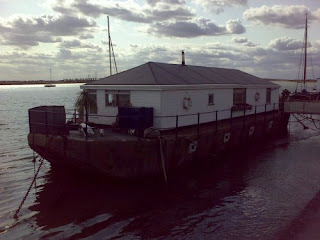 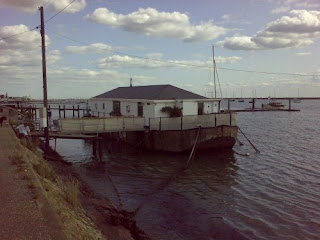 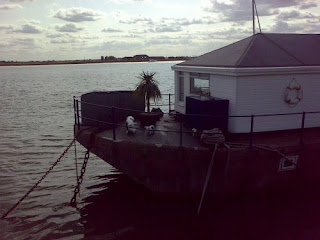 Since moving to Essex in 1972, I have enjoyed walking along the paths either side of the River Crouch. The stretch on the south side of the River, eastwards from Essex Marina, has always been a favourite, and I can remember seeing there an abandoned concrete barge left to die on the mudflats. I wondered if it had been prepared for the D-Day landings on the Normandy beaches in 1944, but had never been used. A good many years later, I noticed this hulk had miraculously turned up at the quayside near Prior’s Boatyard. Within a few months it sprouted a superstructure, which made it resemble a mini Noah’s Ark without the animals*. Eventually the barge was moved to a mooring at West Quay to join other houseboats, where it has remained in quite an enviable position with views over the River to the wetlands of Wallasea Island.

I have often wondered what it would belike to live aboard a houseboat, and recently a friend of mine bought an old fishing boat that had been converted into one. This increased my curiosity. Depending on the location and quality of the boat, prices can vary considerably, perhaps from £30,000 to £500,000. Moving from bricks and mortar into an ancient wooden boat, such as my friend’s, would require a new mindset. Maintaining such a boat could be very expensive and time-consuming. Now and again she will require work on her bottom, just to remain afloat. If she’s on a tidal mooring where she takes the ground at low water, the occupants will feel the motion at each rise and fall of tide. Then there’s the question of security, whereby mooring lines, chains and anchors will need maintaining. There’s no escape from Council Tax, mooring fees and perhaps payments for leases and harbour dues. Location can be important for ease of access to services such as electricity, oil or gas for heating and cooking, sewage etc..

So what are the advantages of living aboard a houseboat? Proximity to the water must be the feature most liked by those who do it. How wonderful it must it be to look over water every day and be entertained by what happens; for every moment is different. In a location such as Burnham, yachts pass by, dinghies race, wading birds feed at the water’s edge, sun reflections sparkle from the water, changing clouds blown by the wind move endlessly across the sky, and at the gangway there’s a footpath to nearby shops, open parkland, a railway station and car parking by arrangement with the local yacht club. Yes, it’s not all idyllic, because during the dark winter months, gales may lash waves against the hull, the wind may howl, and opening a window or door will invite a tornado into the living room.

*Please note that the Burnham Mulberry Ark now has pigs in residence on the stern deck! (See photo)
Posted by William Serjeant at 2:53 pm

Thanks for sharing this informative article
Kerala house boat