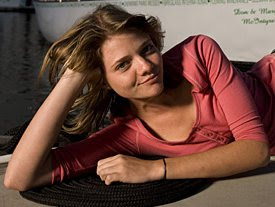 Vibrant, intelligent, confident, highly motivated, and a female Australian; this is Jessica Watson, aged 16. She’s not your average adolescent, but a girl advanced beyond her years; a young lady who in terms of maturity could be mistaken for being older. Well-known in Australia for her ambition to be the youngest person to circumnavigate the world, she set sail aboard, ‘Ella’s Pink Lady’, from Mooloolaba, on the morning of September 8th 2009. Her intention was to have a shakedown cruise to Sydney, but within 24 hours she reported that her yacht had collided with a bulk carrier.

After safely returning to port she was undaunted and unfazed. She thought the incident was an experience from which she could learn, and she was pleased with the way in which she had handled the situation. At a press conference, she praised the Water Police and Maritime Service for their assistance. On being questioned if she would continue her round the world marathon, she said she was even more determined to do it. Her calm attitude and measured self-analysis speaks well of her character and resilience. Damage to the starboard side of her yacht and a broken mast, will ensure her departure will be delayed for several days, if not weeks.

In these times of instant fame because of the rapid dissemination of news, via the electronic media, Jessica has become a household name, particularly among the world-wide sailing fraternity. This unfortunate incident, at the start of her voyage, has brought much publicity and pledges of assistance from her sponsors and friends who show every confidence in her ability to succeed. Famous circumnavigators Dee Caffari and Robin Knox-Johnston have neither criticised nor encouraged Jessica, but they have asked the questions, “Where does this record-seeking stop?” and, “Will the next aspirant be as young as 12, or even 10?” In the pipeline there are two potential contestants: Zac Sunderland’s Californian sister, Abby, aged 15, and a Dutch girl, Laura Dekker, who is not yet 14.

Young Circumnavigator Record Holders so far:
Jesse Martin is an 18-year-old Australian who in 1999 became the youngest person to circumnavigate the globe solo, non-stop and unassisted. His record still stands.
Zac Sunderland is a Californian, who at the age of 17 years and 198 days became the youngest person to sail solo around the globe. He was the first to do it under the age of 18. He completed his circumnavigation on 16 July 2009, and his record stood for six weeks.
Mike Perham, from Potters Bar, Hertfordshire, aged 17 years and 164 days, captured Sunderland’s solo record when he crossed the finishing line off the Lizard Point, Cornwall on 27th August, 2009.