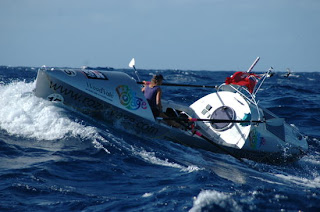 What can I say about this extraordinary woman that has not already been said? I doubt there are few people who watch TV, listen to the radio, or surf the Net who have not heard of her ocean rowing exploits. She first hit the headlines for completing the Atlantic Rowing Race on March, 14th, 2006, being the only female entrant in the solo class. Despite unusually bad weather and the failure of all four of her oars, she completed the race in 103 days. Remarkably she maintained a web log, almost to the end, when her satellite phone failed. In total, after leaving La Gomera in the Canary Islands, she rowed 3000 miles in her 24-foot boat before arriving at Antigua in the West Indies.

Seeking further adventure she embarked on a mission to become the first woman to row the Pacific, and on the 25th May, 2008 she set out from San Francisco bound for Hawaii where she arrived at Waikiki on 1st September, 2008, taking just over 99 days. The total distance covered during this first stage of her voyage was 2,598 nautical miles. Almost to the day, a year later after embarking on the first stage, she set off from Waikiki on 24th May, 2009. Her intention was to row to Tuvalu, but adverse winds and currents forced her to settle for South Tarawa, the Capital of the Republic of Kiribati. This is a tiny island just 60 or so miles north of the Equator and 173 degrees east of the Greenwich meridian.

Arriving there on 5th September, 2009, she received an ecstatic reception from the people of Tarawa who highly values her campaign to reduce global carbon emissions, especially in view of the fact that many of the low-lying islands of Kiribati will be lost, as Polar ice melts because of global warming. Indeed, this highlighting of the need for action now to minimize global warming is a prime reason for her rowing adventures. As a high-profile motivational speaker, communicator and a writer, she is in a better position than most to encourage us to do something before it is too late. Her motto is, ‘One stroke at a time’, and in effect, many small ‘strokes’ achieve a great deal; therefore each one of us can do little things to reduce our carbon footprint, perhaps by cycling to work instead of using the car, or walking to our local shop, recycling our recyclables, and turning down the central heating by a degree or two.

The final stage of Roz’s epic voyage may be the hardest, because of the need to combat unfavourable equatorial currents, winds and the difficulty of navigating through the Great Barrier Reef to the mainland of Australia. Many of us, who vicariously follow her thought-provoking web logs, can’t wait to watch her progress and pray for her safety as she battles with the mighty Pacific Ocean.