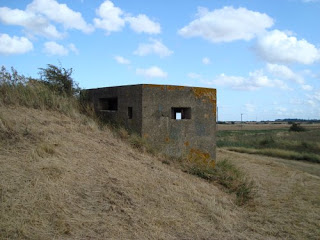 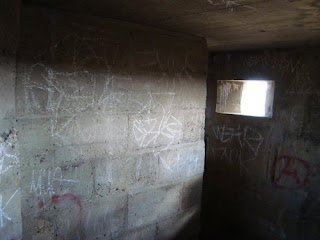 Killing and warfare have plagued the Earth since Cain murdered Abel (Genesis 4:1-15), and there will be no end of slaughter until the creation of a new Earth. (Revelation 21:1-4) I was reminded of man’s warring nature as I walked the footpath at South Fambridge, where there’s a Second World War pillbox. Horrific flashbacks of cinematographic news footage from the early 40s, showing flamethrowers being used against the occupants of pillboxes, suddenly ignited in the consciousness of my mind. Aghast with the impact of these images, I was drawn to examine this hexagonal concrete building. The mini fortification has the form of a gigantic pill box, and I suppose that’s why such structures are called pillboxes. In 1940, about 28,000 of them were hurriedly constructed by soldiers and local labourers using suitable available materials. An Invasion by Hitler’s forces was thought to be imminent; therefore a plan of defence was devised for Home Guard Units to man these defences. Soldiers based at the South Fambridge pillbox would have been equipped with rifles and light machineguns.

As I examined the lichen-covered building, I felt as though I was in the company of those Home Guard soldiers who kept watch day and night, waiting for a time when they might be required to give their all. Dressed in uncomfortable utility uniforms they would have sweated in the summer sunshine and been frozen during a winter’s night. Routinely they would have checked and cleaned their equipment, kept guard, cooked meals, and slept when they could. Personal hygiene and the maintenance of latrines would have been important for morale. Providentially, those soldiers were never put to the ultimate test of endeavouring to halt Hitler’s invasion forces.

I noted that the doorway into the pillbox was sealed, but the embrasures (openings for the deployment of rifles and light machineguns) had been cleared of their seals so that children and nimble adults can wriggle through. I stuck my head into one, and when my eyes became accustomed to the gloom of the claustrophobic interior, I observed that every wall was covered with chalk graffiti. From markings on the ceiling it was obvious that the roof had been made of concrete that had been poured into a wooden mould. I think a small room inside the pillbox would have been used for storing weapons and ammunition. When originally built, soldiers would have had excellent views of the River Crouch, but a few years ago, the river banks were raised to improve the flood defences.

To all appearances, apart from the pillbox, this stretch of land on the South side of the River Crouch looks as if it has always been a peaceful place, but nearby, between Rochford and Canewdon, the bloody battle of *Assandune was fought in 1016. Canute, King of Denmark, with his invaders on Canewdon Hill, faced Edmund Ironside with his army on Rochford Hill. Edmund split his forces into two, putting half under the command of Ederick who sided with the Danes. This traitorous act resulted in a calamitous defeat for Edmund and his army. He later confronted the Danes and made a treaty to divide the country between them. After Edmund’s death, Canute became King of England.

History tells of the past, but is made from the present, and as you read these lines, soldiers and airmen are fighting the Taliban and al-Qaeda in Afghanistan. Bloody history is in the making.
*http://www.girltalk.pcs-net.com/rol/local-history/battle-of-assandune/
Posted by William Serjeant at 5:07 pm