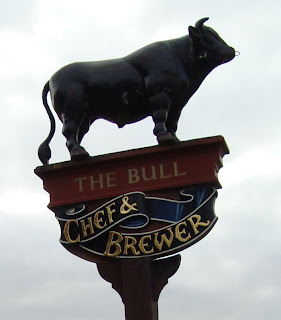 The Campaign to Protect Rural England conducted a recent poll to discover the ‘Icon of England’ and surprisingly the number one icon was ‘The pictorial Pub sign’. There must be thousands of them throughout the land, but with pub closures increasing every year, they could become rare. The history of the origin of the pup sign is well known, but for those who are not familiar with it here’s how they came into being. In ancient Italy at the time of the invading Romans (A.D. 43 onwards), wherever wine was sold, vine leaves where hung outside as a sign to let people know. In England the local brew was ale, and on account of there being few vines, because of the unfavourable climate, ‘Tabernae’ would hang small evergreen bushes outside their taverns on long poles or stakes to advertise their ale. Many years later in the 12th century the naming of pubs and inns became common, and as the general populace was illiterate, signs were hung outside premises as a means of identification and to advertise their presence. By 1393 there were official Ale Tasters, and King Richard 11 passed an Act making it compulsory for pubs to display signs for the tasters. Names and signs changed with the times, but they often were associated with local features, for example the Hare and Hounds, the Plough and Sail, the Royal Oak, etc..

One pub sign I know which is truly iconic is, ‘The Bull’. Whenever I see it I am reminded of the golden calf worshipped by the Israelites when they thought Moses had died or abandoned them on the mountain. (Exodus 32:1-5) Icon worship exists today, because unwittingly we set people on pedestals, or place prized possessions foremost in our priorities.
Posted by William Serjeant at 9:58 pm