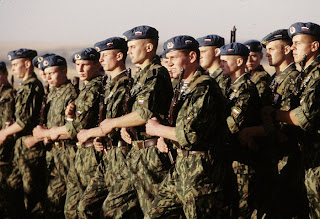 Obedience is almost a taboo word today, and yet without countless acts of obedience there would be catastrophic consequences. The simple act of disobeying the rule of the road to drive on the left or the right according to the laws of the land where you live would bring carnage. Imagine the consequences of not obeying the rules of seamanship that separate shipping on the high seas, especially in busy, but confined waterways such as the English Channel. These rules of safe passage are obeyed voluntarily by those in charge of vehicles on the road, and by shipmasters in charge of vessels on the high seas. Commonsense prevails over stubborn wills when it comes to self-preservation or respect for the life of others; not only is it commonsense to obey such rules, but obedience under these circumstances is deemed right and the only acceptable practice.

From the moment we are born we come under those in authority, i.e., our parents who are responsible for our welfare. They subject us to rules for our benefit and for themselves, and this is the pattern from family to the society in which we live and within the world as a whole. In Europe all citizens are subject to local laws and the laws of the country in which they reside. Europe in turn subscribes to the United Nations whose purpose is to promote peaceful cooperation between countries and support law and order throughout the world-wide community; yet, within this pattern of law and order there are always mavericks and disobedient people who will not obey those in authority.

The concept of authority and submission to it does not go down well with self-willed man, particularly in these times of supposed equality and equal worth as defined by the Human Rights Act of 1998. At the heart of the problem of disobedience is self-will, and that can be traced back to Eve in the Garden of Eden when she disobeyed God by eating the forbidden fruit.* Since then, all of her offspring who survived the world-wide flood through the family of Noah have inherited her trait of self-will, despite the obedience of Noah to God.+