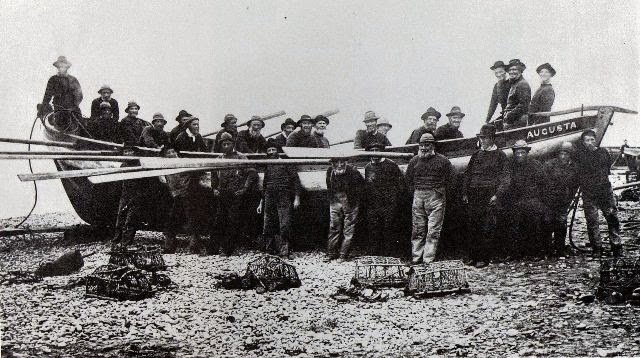 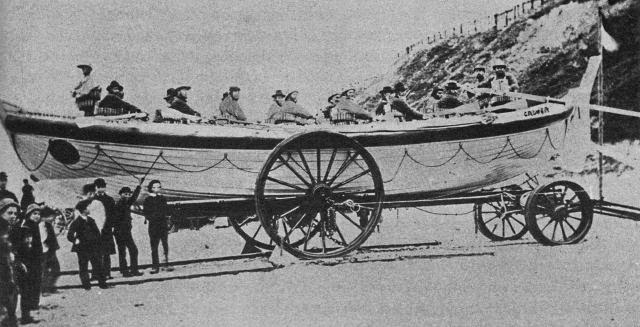 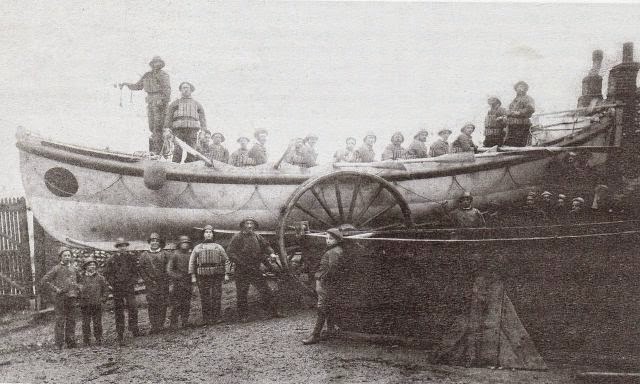 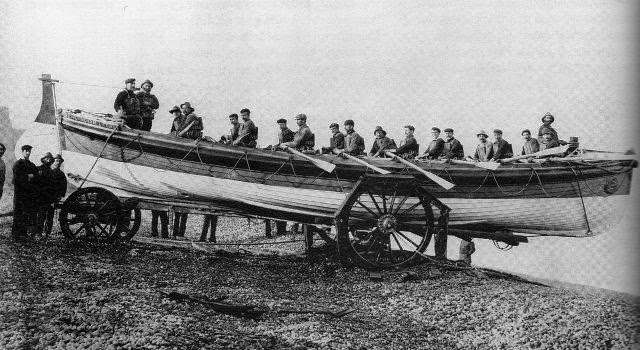 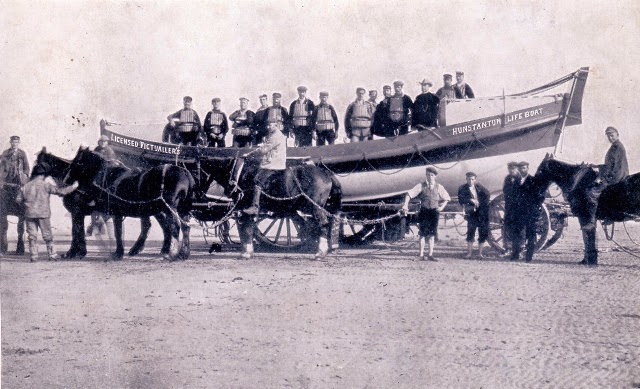 November, 14th 2005 saw me copying a poem to my blog for that day’s entry. Here it is again, but with illustrations of pulling and sailing lifeboats in service at the time the poem was written, i.e., about 1880.


"The Lifeboat"
By George R. Sims

Been out in the lifeboat often? Ay, ay, sir, oft enough.
When it's rougher than this? Lor' bless you! this ain't what we calls rough!
It's when there's a gale a-blowin', and the waves run in and break
On the shore with a roar like thunder and the white cliffs seem to shake;
When the sea is a hell of waters, and the bravest holds his breath
As he hears the cry for the lifeboat -- his summons maybe to death --
That's when we call it rough, sir; but, if we can get her afloat,
There's always enough brave fellows ready to man the boat.
You've heard of the Royal Helen, the ship as was wrecked last year?
Yon be the rock she struck on -- the boat as went out be here;
The night as she struck was reckoned the worst as ever we had,
And this is a coast in winter where the weather be awful bad.
The beach here was strewed with wreckage, and to tell you the truth, sir, then
Was the only time as ever we'd a bother to get the men.
The single chaps was willin', and six on 'em volunteered,
But most on us here is married, and the wives that night was skeered.

Our women ain't chicken-hearted when it comes to savin' lives,
But death that night looked certain -- and our wives be only wives:
Their lot ain't bright at the best,sir; but here, when the man lies dead,
'Taint only a husband missin', it's the children's daily bread;
So our women began to whimper and beg o' the chaps to stay --
I only heard on it after, for that night I was kept away.
I was up at my cottage, yonder, where the wife lay nigh her end,
She'd been ailin' all the winter, and nothing 'ud make her mend.

The doctor had given her up, sir, and I knelt by her side and prayed,
With my eyes as red as a babby's, that Death's hand might yet be stayed.
I heerd the wild wind howlin', and I looked on the wasted form,
And though of the awful shipwreck as had come in the ragin' storm;
The wreck of my little homestead -- the wreck of my dear old wife,
Who'd sailed with me forty years, sir, o'er the troublous waves of life,
And I looked at the eyes so sunken, as had been my harbour lights,
To tell of the sweet home haven in the wildest, darkest nights.

She knew she was sinkin' quickly -- she knew as her end was nigh,
But she never spoke o' the troubles as I knew on her heart must lie,
For we'd had one great big sorrow with Jack, our only son --
He'd got into trouble in London as lots o' lads ha' done;
Then he'd bolted his masters told us -- he was allus what folks call wild.
From the day as I told his mother, her dear face never smiled.
We heerd no more about him, we never knew where he went,
And his mother pined and sickened for the message he never sent.

I had my work to think of; but she had her grief to nurse,
So it eat away at her heartstrings, and her health grew worse and worse.
And the night as the Royal Helen went down on yonder sands,
I sat and watched her dyin', holdin' her wasted hands
. She moved in her doze a little, then her eyes were opened wide,
And she seemed to be seekin' somethin', as she looked from side to side;
Then half to herself she whispered, "Where's Jack, to say good-bye?
It's hard not to see my darlin', and kiss him afore I die."

I was stoopin' to kiss and soothe her, while the tears ran down my cheek,
And my lips were shaped to whisper the words I couldn't speak,
When the door of the room burst open, and my mates were there outside
With the news that the boat was launchin'. "You're wanted!" their leader cried.
"You've never refused to go, John; you'll put these cowards right.
There's a dozen of lives maybe, John, as lie in our hands tonight!"
'Twas old Ben Brown, the captain; he'd laughed at the women's doubt.
We'd always been first on the beach, sir, when the boat was goin' out.

I didn't move, but I pointed to the white face on the bed --
"I can't go, mate," I murmured; "in an hour she may be dead.
I cannot go and leave her to die in the night alone."
As I spoke Ben raised his lantern, and the light on my wife was thrown;
And I saw her eyes fixed strangely with a pleading look on me,
While a tremblin' finger pointed through the door to the ragin' sea.
Then she beckoned me near, and whispered, "Go, and God's will be done!
For every lad on that ship, John, is some poor mother's son."

Her head was full of the boy, sir -- she was thinking, maybe, some day
For lack of a hand to help him his life might be cast away.
"Go, John, and the Lord watch o'er you! and spare me to see the light,
And bring you safe," she whispered, "out of the storm tonight."
Then I turned and kissed her softly, and tried to hide my tears,
And my mates outside,when the saw me, set up three hearty cheers;
But I rubbed my eyes wi' my knuckles, and turned to old Ben and said,
"I'll see her again, maybe, lad, when the sea give up its dead.":

We launched the boat in the tempest, though death was the goal in view
And never a one but doubted if the craft could live it through;
But our boat she stood in bravely, and, weary and wet and weak,
We drew in hail of the vessel we had dared so much to seek
. But just as we come upon her she gave a fearful roll,
And went down in the seethin' whirlpool with every livin' soul!
We rowed for the spot, and shouted, for all around was dark --
But only the wild wind answered the cries from our plungin' bark.

I was strainin' my eyes and watchin', when I thought I heard a cry,
And I saw past our bows a somethin' on the crest of a wave dashed by;
I stretched out my hand to seize it. I dragged it aboard, and then
I stumbled, and struck my forrud, and fell like a log on Ben.
I remember a hum of voices, and then I knowed no more
Till I came to my senses here, sir -- here, in my home ashore.
My forrud was tightly bandaged, and I lay on my little bed --
I'd slipped, so they told me arter, and a rulluck had struck my head.

Then my mates came in and whispered; they'd heard I was comin' round.
At first I could scarcely hear 'em. it seemed like a buzzin' sound;
But as my head got clearer, and accustomed to hear 'em speak,
I knew as I'd lain like that, sir, for many a long, long, week.
I guessed what the lads was hidin', for their poor old shipmate's sake.
So I lifts my head from the pillow, and I says to old Ben, "Look here!
I'm able to bear it now, lad -- tell me, and never fear."

Not one on 'em ever answered, but presently Ben goes out,
And the others slinks away like, and I say, "What's this about?
Why can't they tell me plainly as the poor old wife is dead?"
Then I fell again on the pillows, and I hid my achin' head;
I lay like that for a minute, till I heard a voice cry "John!"
And I thought it must be a vision as my weak eyes gazed upon;
For there by the bedside, standin' up and well was my wife.
And who do ye think was with her? Why Jack, as large as life


To the wreck of the Royal Helen; 'twas that as the vision meant.
They'd brought us ashore together, he'd knelt by his mother's bed,
And the sudden joy had raised her like a miracle from the dead;
And mother and son together had nursed me back to life,
And my old eyes woke from darkness to look on my son and wife.
Jack? He's our right hand now, sir; 'twas Providence pulled him through --
He's allus the first aboard her when the lifeboat wants a crew.


In the Workhouse Christmas Day by George R. Sims


Lifeboats through the Ages