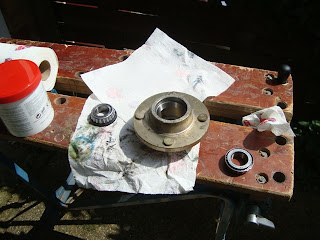 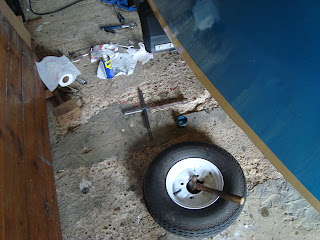 I think I’ve finally cracked it! – not the bearings, but replacing a second set on the axels of ‘Sandpiper’s’ road trailer. Having changed the wheel bearings on the nearside wheel a week or so ago, I discovered the offside ones also had to be replaced. Today I did the job in less than an hour. In retrospect, I’m pleased the problem came to light when it did, because I’m now confident the new ones will be good for hundreds of miles, providing I prevent water entering the wheel hubs. As mentioned in a previous article, I came up with a simple solution for stopping water entering the wheel hubs. Before the boat is launched, I cover the wheel hub breathing holes with small pieces of insulation tape. 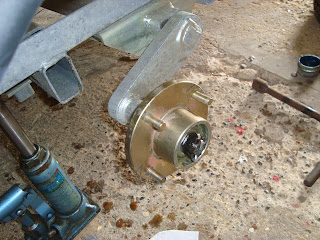 By the state of the old bearings I think the trailer must be older than it looks. Water must have lodged in the wheel hubs for some considerable time to have made the bearings so rusty, and I’m thankful I did not tow the trailer over long distances before becoming aware of the problem. When I was inspecting the boat before I bought her, I was about to jack up the trailer to check the bearings, at which time the previous owner intervened.  He said there was no point in looking at the bearings, because the trailer was virtually new. I agreed with him, and put away my jack.
Posted by William Serjeant at 9:53 pm

Bill, see my comment in your previous blog re. bearings
Cheers
Paul

I took note of your previous comment, and I may buy a pair of Bearing Buddies for £32.00; meanwhile I shall seal the breathing holes on the hubcaps with insulating tape.

OK I wasn't sure if you had seen it!
They really are good
Cheers
Paul