What are the options for storing petrol aboard my West Wight Potter? The same question could be asked of the owner of any small boat powered by an outboard motor. If the vessel is a dinghy for transporting a crew from shore to yacht, and vice versa, perhaps the outboard’s integral tank will suffice. In which case, no petrol need be stowed on the yacht. When on a cruise, however, the prudent skipper will ensure he has an adequate supply of petrol onboard for the dinghy’s outboard; he will make sure it is properly and securely stowed. 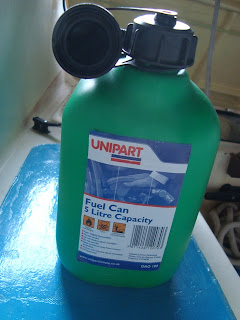 Bought at the Esso station 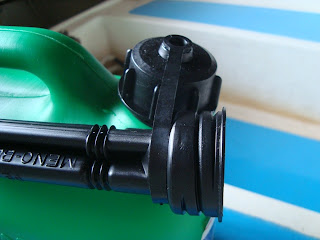 It is not good to put a jerrycan containing petrol in direct sunshine; in fact, there will be a warning on any good quality jerrycan specifically made for storing petrol, not to do so. Ideally it should be stowed in a well-ventilated, cool compartment.


Transferring petrol from a jerrycan to an outboard’s tank can be a bit tricky. Care must be taken not to spill the volatile liquid, particularly into the water, because the release of toxins from it will affect creatures that depend upon pollution-free water for their lives. A spillage of petroleum in the bilge of a boat could be hazardous for her crew, as a build-up of fumes could accidentally be ignited - one spark, and within seconds, the vessel could be a fireball. 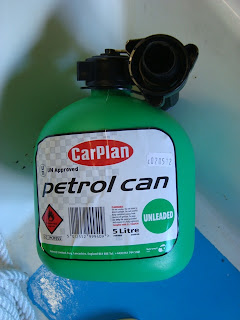 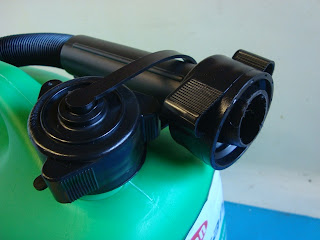 Two part nozzle
Now and again one hears of boats that have been engulfed in flames because of a fuel spillage. To minimize the chances of this happening, precautions need to be taken. The most likely time for a spillage is when refuelling the engine. A large funnel can help prevent an accidental spillage when refuelling. I always tie my funnel to the boat to prevent it from going over the side. Before topping up the tank I double-check to make sure that the spout has been securely screwed into place.


Some jerrycans are better designed than others, and because of this they are less of a problem when it comes to attaching the spout. I bought a cheap can at my local Esso filling station and I subsequently discovered that unless I take great care to ensure that the spout is well and truly screwed into place, it will leak.


Because the capacity of the fuel tank of my Honda 2 HP outboard is one litre, on average I have to replenish the fuel every 50 to 55 minutes. One full 5 litre can will hold enough petrol to power the boat for a maximum of 4 ½ hours; thus at 3 knots the potential distance travelled over the ground could be 13.5 nautical miles - depending on the direction and strength of the wind, similarly with the water. Two jerrycans will take me 27 miles, more than enough for a crossing of the English Channel at the narrowest part – not that I intend doing so. The less I turn on the motor, the better it will be, not only for my pocket and the environment, but for my peace, and peace of mind.


To answer my opening question, I only have one place for stowing petrol – that’s if I wish to avoid direct sunshine, although there has not been much of it lately, I shall have to keep it in the stern locker.
Posted by William Serjeant at 8:57 pm