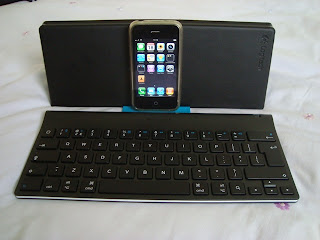 So the saga continues, but the end is nigh. Comet would not reimburse my money, because the assistant who served me demonstrated that my Logitech Tablet Keyboard could be paired to his iPhone 4. I pointed out that blurb on the Logitech website stated that the keyboard was compatible with iPhones. What I didn’t know was that in very small print at the support page for Logitech keyboards there is an almost hidden notice saying that the iPhone 3G is not supported, even if its operating system is 4.2.1 which mine is. That in itself is puzzling, because the iPhone 4 has an identical operating system.


The long and the short of it is that the man at Comet advised me to visit my nearest Apple Store for help. I went along to Lakeside and I was greeted by an Apple Store technician who did a fantastic job researching why my phone would not pair with the keypad. He referred the case to a Logitech specialist who said he would look into the matter, because he (the Logitech man) did not understand why. He promised to send me an email outlining his findings.


That still leaves me with a keyboard that does not pair with my phone.


When I told the Apple chap that Comet did not refund my money, he exploded like an erupting volcano and immediately phoned the Comet Call Centre to ask if I should have been given my money back. They categorically said I should have been reimbursed.


I am now left with a quandary, do I revisit the Comet store and demand a reimbursement, or do I keep the keyboard for when I may possibly own an iPhone 4 or an iPad? I could auction it on Ebay or give it away.


One thing for sure, the pain has come to end. I am resigned to the fact that unless I change my phone or obtain an iPad, the keyboard is as useful to me as a million dollars in cash is to a starving, dehydrated castaway on a desert island!
Posted by William Serjeant at 10:33 pm

I hope this is going to have a good ending as I may be following you down this route in the not to distant future.

The battery in my old Motorola phone is failing. I either need to replace it or replace the phone. The battery is only about £8 but the phone is generally running down as well.

Not sure if I'd go for an iPhone, iPad or a much cheaper Android based unit at this stage. Either way, I like you Bill, would want an external keyboard. Took me 20 mins to do a text the other day in a dimly lit room!

If you find a suitable smartphone with an external Bluetoogh keyboard, please drop me a line.