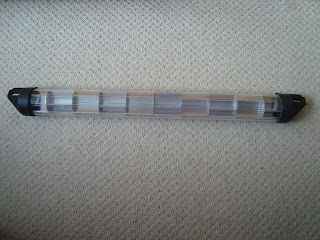 ‘Sandpiper’ at 14’ LOA is only a tiny boat. The likelihood of her being visible on a radar screen is minimal; nor will she be easily seen from the bridge of a ship by the duty watch officer. Her hull is blue and the top of her mainsail is blue; her cabin top is white. Therefore, she should be well camouflaged, which would be an advantage if she were on a ‘stealth’ mission, but a distinct disadvantage if she’s anywhere near a shipping lane. To make her more visible on radar I shall hoist a small tubular reflector that I occasionally used on ‘Ladybird’.


There are several types of radar reflectors, but I believe there are none more suitable for a small boat than the one I have. It has minmal windage, is light, and according to the manufacturer (Plastimo) it is effective. The dimensions are 58 centimetres by 5 centimetres, offering 2 square metres of reflective area! Probably the best place for deploying the reflector will be high up, attached to one of the shrouds.


On a couple of my previous yachts I have used the old-fashioned, aluminium octahedral reflector. This type when folded flat, takes up very little space, but when assembled it is too large for a small yacht. Windage for this type is high, and chafe on the sails is another problem.
Ecomax cylindrical reflectors are more efficient, because they have a large reflective area for their size; however, they are heavy - even the smallest weighs 1.4 kilograms, and I certainly do not want a 47.8 centimetre by 19.7 centimetre object near the top of the mast. At £116.94 from my local chandlery, the smallest Ecomax, inclusive of mounting brackets, is way too expensive.

Posted by William Serjeant at 8:13 pm

. . . . The Plastimo Compact cylindrical radar reflector is available on eBay for just under £24 in postage!

I've just purchased one for Molly!

Hi Bill, I was considering buying one like this for Ciao Bella for all the reasons that you have mentioned. While searching for a good deal I came across the QinetiQ report on radar reflectors following the Ouzo sinking. None of the passive type reflectors worked well however the cylindrical ones were singled out as inefficient. I now have an octahedral type which I can quickly hoist when in shipping areas or in poor visibility.
Worth looking up the report before deciding. Cheers Phil.

Thank you. I already have the one shown in the photo. Other types are not as handy for my small boat. If I find myself near a shipping lane, I'll deploy it anyway.