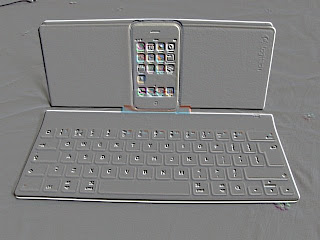 No more than a forgotten dream


I believe the painful saga has come to end, but I’m not quite sure. As far as I am concerned, Comet has done the honourable thing by reimbursing my money for the Logitech Tablet Keyboard. The fellow who dealt with me explained that the issue was not between Comet and me; rather it should be between me and Logitech.


The Logitech website states that the keyboard pairs with iPhones; therefore one assumes the pairing is with ‘all’ iPhones. Logitech should have clearly stated that it does not pair with the iPhone 3G. (You can read the exact wording by visiting the link below – look under the heading, ‘Speaks Apple’.)


If the website had included that information, I would not have purchased the keyboard from Comet. Consequently I’ve been struggling to pair my iPhone 3G with the keypad. That struggle included a visit to the Apple shop at Lakeside.

Taking into account time spent trying to link the phone and time and effort travelling to and fro, I am out of pocket, but on the positive side I’ve learnt a lesson that I cannot believe everything I read on a website! On reflection, I feel sure the paucity of information at the Logitech website was not deliberate.


The fellow at ‘EMEA Support Logitech’ sent me his promised email. He said the Logitech Tablet Keyboard was ‘exclusively’ designed for iPad 3rd generation, iPad 2 and iPad. He went on to say it cannot be used with iPhones. Clearly he is wrong, because the keyboard positively pairs with iPhone 4 – but perhaps not every function key on the keyboard will operate as it does with an iPad.


Right now I’m very happy to stop banging my head against a brick wall for a chance to recover and to delete painful memories as if they never existed.

G R E A T BUT you still don't have a keyboard?

Your are absolutely right Steve.

If you know of a keyboard that will pair with an iPhone 3G, or anybody else for that matter, please let me know.

No more headaches, however.

I could do with one that actually works. There's no way I want this to turn into a nightmare.