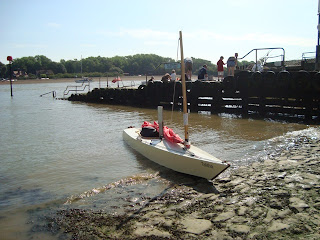 I took ‘Talitha’ to the River Deben by road, arriving at Felixstowe Ferry about 0930. That’s right at the mouth of the river opposite Bawdsey Manor on the far shore. It was about half flood when I pushed off from the Ferry Slipway. The wind was from astern as I progressed to a point south of Ramsholt Marshes. From there the River gently meanders in a north by west direction as far as Woodbridge. The scenery is low-lying farmland with occasional clumps of trees on both sides of the river until a small bluff before Shottisham Creek; there, the river bank is more densely wooded. It’s a popular anchorage, as the land provides a lee from the wind when it is from the south east or east. 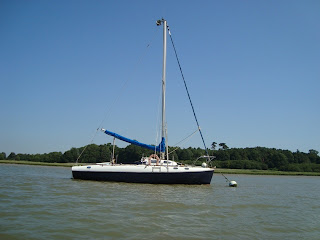 I sailed close to Ramsholt Quay to have a look at the red tiled building that serves as an Inn - the Ramsholt Arms. The pub is a favourite venue for DCA folk when they have their rallies on the Deben. I was reminded of my DCA cruise there aboard ‘Micro’ in June 2001. 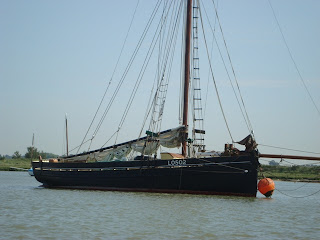 There are a number of interesting yachts based on the Deben, and I managed to take photos of five of them.


By the time I arrived at Waldringfield, the wind had freshened to almost a Force 3, and the tide was flooding until 1330. I therefore thought it prudent to turn around, and attempt beating back to the sheltered anchorage south of Shottisham Creek. At first, I made little progress, but gradually, ‘Talitha’ clawed her way to windward between the moored yachts adjacent to Waldringfield Boatyard. 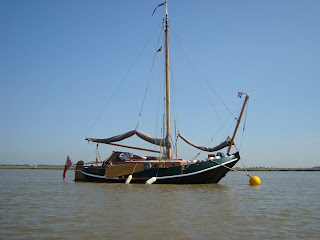 At 1250 I anchored in the lee of the bluff, not far from a collection of yachts, one of which was a real beauty, with the name ‘Katie’. She was flush-decked, and she had a large dodger over the forward end of her cockpit. She looked a bit like an Albert Strange masterpiece with an unusual rounded taffrail. Her bowsprit featuring Wykeham-Martin furling gear looked just right. I liked her very low freeboard, which would present little windage when going to windward. 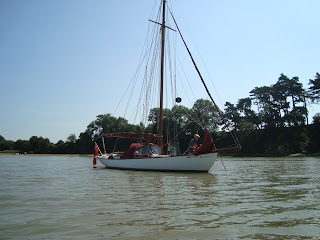 Other yachts I saw were a classic Fairey Atalanta, a Dutch yacht with leeboards, and a sleek wooden yacht with a very odd mast that markedly curved backwards near the top. I can’t say I liked the mast, but was certainly different.


Shortly before the ebb, I broke out the anchor and made sail, but not before putting on my sweater, in anticipation of being showered with spray from the occasional wave top that awkwardly catches ‘Talitha’s’ bow. In fact, it got a little wetter than I anticipated; so I hove to and donned my anorak. That kept me dryer and warmer than the sweater alone. 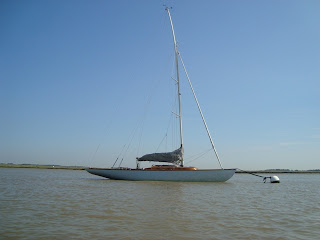 As it was getting on for top of springs, the ebb was rushing out towards the sea, and by the time I arrived at the Ferry Jetty there was a fair old whirlpool between the wooden jetty and the slipway. I hauled up the keel, and at the last moment, released the rudder bungee before ‘Talitha’s’ bow gently nudged on the sand beside the stony slipway. Hopping out smartly, I lowered the sail and stowed it on the side deck. A local catamaran sailor helped me carry the boat partially up the slipway.


Because it was a bit frenetic with people wanting to use the slipway, I quickly pulled the boat onto her trailer, with her keel in her; then slowly drove to the boat park of the sailing club where I made her ready for the road.


All in all, it had been an excellent sail in beautiful surroundings.