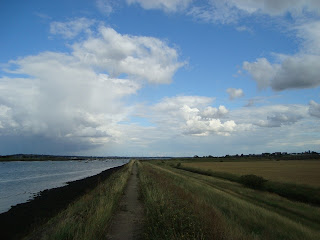 Beside the River Crouch

For the past couple of months the weather here in the UK has been decidedly unsettled. Yesterday, 27th August was typical with sunshine and showers, calms and windy spells – not the fine weather I hoped for to go camping with ‘Talitha’, my small, homebuilt keelboat. That’s nothing new, because the weather for this time of year is running true to form.


It is the hurricane season for the Caribbean and eastern seaboard of the US. These unwelcome, awesome natural phenomena wreak devastation upon whomever they choose, causing loss of life and vast damage to property. As I write, Hurricane Irene threatens Battery Park City in Lower Manhattan, where residents have been evacuated; likewise there’s a prediction that Long Island, east of New York City could be subjected to a storm surge that would be far more lethal than havoc caused by the wind.


By comparison, we in the UK seldom experience winds of hurricane force, but we feel the after-effects of hurricanes when they diminish in force and expand while travelling over the Atlantic to bring rainstorms over Britain. Scotland normally takes the brunt, while the south east of England sometimes escapes.


On Saturday afternoon I took a walk beside the river Crouch at South Fambridge, and my attention was drawn to the sky where there were volatile clouds, rapidly changing their forms and colours. Gusts were accompanied with light showers that sprinkled rain drops on my anorak, soon to be dried by the wind and fleeting bursts of warming sunshine. 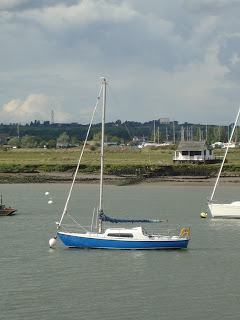 I couldn’t resist glancing at a beautiful Pioneer 9 that lay to her mooring waiting for her owner to take her for a spanking sail. She was like a pup, impatient for a romp when he heard sound of his master who returned home from work or a hound anxious for the hunt at the call of the pack. The graceful blue yacht so reminded me of my Pioneer ‘Aziz’ when she was alive. Now she’s all but dead, propped up on a quay at Calstock, Cornwall. Could this famous yacht be revived and preserved as a living tribute to Nicolette Milnes-Walker, who sailed her across the Atlantic to become the first woman to do it without putting into port en route?


If only I lived near Calstock I would be inspired to form a consortium of interested partners and sponsors to bring it about. A group of enthusiasts is all that is needed. They could share her between themselves, finance the project and carry out the necessary renovation.


A Whale of a Time

Posted by William Serjeant at 9:42 am