After starting an activity there is opportunity for making progress towards a finish. Without progress, the end cannot be attained. At this very moment Sven Yrvind is sailing towards Madeira aboard his micro-sailboat, ‘Yrvind.com’. As mentioned in a previous blog (see Links below) he hopes to reach Florida for a meeting with Matt Layden.


There have been comments on various Internet forums about Sven’s apparently slow progress. At 1751 on 16th August his position was 048.73 degrees north and 008.96 degrees west. He departed from Kinsale Harbour on 11th August at 0948, which means he has been at sea for 5 days and 8 hours and he has travelled a distance of about 130 land miles/113 nautical miles, averaging 0.88 knots, i.e., doing 21 nautical miles a day over the ground.


The distance between Kinsale and Porto Santo, Madeira is roughly 1200 nautical miles. If he is unable to increase the average speed of his yacht he will take 1364 hours which is nearly 57 days - that’s approximately another 52 days to go from his position at 1751.


The conditions he is experiencing are rather rough. Only today there’s been news of a Fastnet Race yacht that lost her keel, not so very far from Sven’s position.


He mentioned at the outset that he would be looking to ways of self-steering his boat. He had not devised or perfected a means of self-steering and I believe he has no radio for communicating with the outside world, except in emergency via his Spot tracker. Therefore we do not know if he has been successful in getting his boat to self-steer. Without self-steering, he will have to heave to and take sleep.


According the wind charts for tomorrow, Sven will have a favourable north easterly wind of about Force 2. 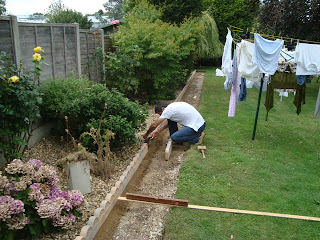 My son-in-law is making ‘progress’ with reinstating the lawn edging.

Posted by William Serjeant at 10:50 pm