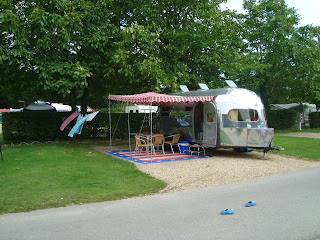 An American style caravan at the site

A couple of my boating pals gave up yachting and took up caravanning. They reached the stage where they no longer felt confident when cruising or racing their yachts because of lack of fitness and agility due to old age. They still had a desire to explore new places, but without the restrictions and discomforts of yachting, particularly if caught out in bad weather. Being tossed around on a yacht no longer had appeal.


On the other hand, they seemed quite happy to put up with queues and congestion on the roads, and accept being in close proximity with other caravanners crammed into over-populated sites. 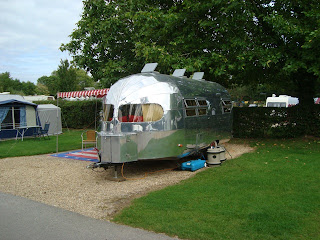 Close-up of the aluminium caravan

Many years ago I borrowed a small caravan and took my young family to Devon for a holiday. In the early 60s there were few restrictions as to where one could park a van. Therefore we would find a free car park for the night or stop by the roadside. Petrol was cheap and food was also cheap. We had a whale of a time.


For the past few days my wife and I have been guests at a large caravan and camping holiday centre near Bournemouth. Our caravan was not big enough to accommodate us all, but by extending the sleeping quarters into the canopy we could manage.


The contrast between our experience in the small caravan and our recent holiday could not have been greater. At the latter there were hundreds of caravans and tents, and ‘thousands’ of children, most of them with bicycles or scooters. There were entertainments, activity centres, two swimming pools, a pub and a restaurant. You can imagine the mayhem, hustle and bustle created because of them - children on their cycles, pedestrians, cars and caravans all competing for space on narrow service roads. This was a recipe for disaster. I witnessed a girl who crashed her cycle into a parked car, and I saw a collision between two children on their cycles.


The Holiday Centre catered for families, especially those with young children. No doubt, many of the youngsters and their parents had a fabulous time. I certainly enjoyed being with my grandchildren. I saw delight on their faces when they watched a Punch and Judy show and when they cheered a clown as he juggled balls while riding a monocycle. I had fun being with the three boys when they did leaf printing and painted tee-shirts. I was happy to splash around with them in the swimming pool, and I was amazed how relaxed they were in the warm toddlers’ pool.


The thing that struck me most was the luxury accommodation of modern caravans – homes on wheels with built-in furniture, showers, loos, fridges and TVs. The large site where we were had several washrooms, toilets and a launderette. There was a shop with most necessities.


Would I go again? Yes, for the sake of the children, not for me, because it was not my scene. I prefer solitude, peace and quiet where I can be at one with nature. Give me a boat any time, along with discomforts, which is part of the fun - making do, getting by, improvising and being creative. That’s the life.

Posted by William Serjeant at 9:44 pm

Loving the look of the aluminium caravan, very different!