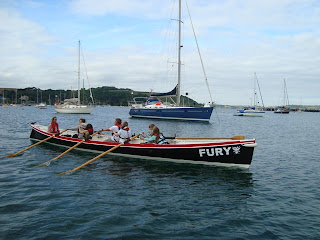 If I could choose a motif, emblematic of Cornwall I would go for the Cornish pasty, but there’s a strong contender, and that’s the Falmouth Pilot Gig. I have visited Falmouth by boat on numerous occasions, and the image that comes to mind of that wonderful natural harbour is the vision of pilot gigs gliding to and fro. Of an evening they can be seen with their crews, male or female, youth or veteran, training and straining at their oars, accompanied by the lively rhythmic chants of their helmsmen echoing over the water.


The oldest active gig is the ‘Treffry’, built in 1838 by the Peters family of St Mawes, now rowed by members of the Newquay Rowing Club. As the name suggests, Falmouth pilot gigs were specifically designed for transferring pilots from the shore to sailing ships arriving off the Cornish coast. The crew of the first gig to get a pilot aboard received payment for their service; unsuccessful competitors went home empty-handed or remained at sea for as long as they could in the hope that another prize would turn up.


In the appropriate seasons gigs carried cargoes of potatoes and cut flowers from the Scilly Isles to the mainland. They were the earliest lifeboats, and the last known rescue was carried out by the crew of the ‘Sussex’ attending to the wreck of the ‘Mindau’ when she floundered on the Isles of Scilly in 1959. The ‘Sussex’ was built in 1886. She was owned by the late Ralph Bird, who was a skilled builder of gigs. I had the pleasure of briefly meeting Ralph who was a friend of a friend of mine. The ‘Sussex’ was originally built for the inhabitants of Bryher. Now I believe she is currently on loan to the Porthleven Gig Club.


Modern six oared racing gigs are almost identical to the classic ‘Treffry’, built with Cornish narrow leaf elm, having an overall length of 32 feet and a beam of 4 foot 10 inches. If it hadn’t been for a handful of enthusiasts with appropriate boat building skills these fine rowing boats would have been confined to the archives. The last time a gig was used for transferring a pilot to a ship was in 1939. The decline of sail and oar for commercial purposes came about with the introduction of steam-powered vessels at the end of the 18th century. Gigs were no longer competitive; therefore they were left to rot or were broken up.


The story has a happy ending, because gig racing today is a healthy expanding sport with at least 25 clubs in Cornwall, together owning around 50 boats. The Cornish Pilot Gig Association has a membership of 55 clubs with 145 registered gigs. The World Pilot Gig Championships are hosted annually by the Isles of Scilly towards the end of April each year. There is a small level of sponsorship by firms such as the St. Austell Brewery, Rock the Boat and J. Sutton, traditional blade makers, but amateur enthusiasm, friendly competition, pride of achievement and self-support continue to be the driving forces behind the success of gig racing. May it continue.


Rumour has it that the Falmouth Pilot Company is recruiting interested parties to provide traditional rowing gigs for the original purpose for which they were designed. The Company will be offering £750 per run to successful boats. Whether this is fact or fiction, I do not know, but wouldn’t it be good for the environment and a boost to those who love gig racing?


History of the Gig

Posted by William Serjeant at 9:32 pm