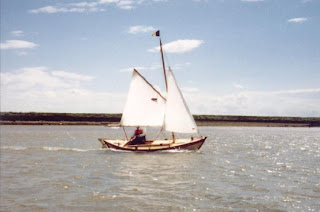 
Although there had been cloud overnight, the morning was fairly clear. As the day progressed, so the sky became bluer, and only a few fluffy white clouds resembling frisking lambs remained. They jumped with joy; likewise, I inwardly jumped with joy, because I was alive!


This time I had got it right. I had chosen a spot where 'Micro' would remain afloat at low water. There was zilch wind; therefore I set off under oar. The time was 0630, and low water at Harwich was scheduled for 0700. Making use of the last of the ebb, I took the boat over the shallows of Shotley Sands. I was delighted that I could row at about two-and-a-half knots. Thus, I was able to make progress against the weakening ebb from the River Stour.


I kept well clear of a huge catamaran manoeuvring into Parkstone Quay. She was awesome and intimidating – intimidating, because she resembled a large sea monster with a shark-like mouth, and awesome, because of her size. A small boat like ‘Micro’ that happened to be in her path would not stand a chance. Silently, and without assistance, she docked at the quay.


Gradually the wind filled-in from the southwest. I made sail. Unknown to me, I was to experience the most exquisite sail of the season. Words are inadequate to describe how it felt. Every now and then the wind momentarily increased, not suddenly as with a squall, but with a steady acceleration until reaching a peak, before easing off. This periodic, rhythmic fluctuation, made the exercise of sailing to windward a real joy. The flood took hold of 'Micro', so that she sped towards Manningtree.


I discovered how sensitive she was to trim. If I moved forward, weather-helm increased; conversely, if I moved towards her stern, weather-helm decreased. By adjusting my position I could eliminate weather-helm altogether. Balancing the boat in this way, improved her performance to windward. Strangely, other vessels I have owned have performed better on the wind when I have moved forward.


‘Micro’s’ headlong rush, over the tumbling waves, excited me greatly. I looked for trailing weeds near the surface of the water. At the first sign of them I would tack the boat into deeper water. Further up the river, port and starboard hand buoys were better indicators of where to find deeper water.


Because of the fluky wind at Wrabness, brought about by the bluff of land, I kept well clear of the moored yachts to give me space for changing tack. In the event, this was a wise precaution. By keeping a wide berth I was able pass without mishap.


This time, Wrabness was more hospitable than when outward-bound. A man was repairing one of the piles supporting a waterside chalet. His presence made all the difference. Before, there had been an absence of life, causing the place to look like a ghost town.


The strength of the wind had increased. No longer were there gentle fluctuations, but proper squalls, requiring me to ease sheets. Things were getting lively, and I needed to respond. It was time to reef. Why take chances? After all, the ramp at Mistly Sailing Club was but a half-a-mile away, and there were moorings to negotiate. My priority was to concentrate on keeping to the channel which was best found by taking a course between the moored yachts.


Ahead, an elderly couple in a Wayfarer let go their mooring, and their dinghy drifted astern. They had not been vigilant, or if they had, they had not anticipated they would become a hazard to me and my boat. This brought about an adrenalin rush. I immediately downed the sails, and fortunately ‘Micro’ ended up by the side of a moored yacht to which I attached a painter. Not in the least concerned, the unwitting sailors set off to enjoy their afternoon's sail.


High water for Mistley was at 14.00. That gave me plenty of time for beaching the boat and for preparing her for her trailer, but three cars were blocking the ramp! There was no need to panic - I simply needed to think things through, and do one job at time.


Needless to say, all went well, and I phoned my wife to reassure her that I was safe. She would not have to put in a claim for a widow's pension, nor make arrangements with an undertaker for the disposal of my body.


I had not regretted the opportunity of taking my three-day cruise. I had learnt how to get the best out of the boat, especially, when sailing her to windward. I had been refreshed, mentally and spiritually, and I had benefited from the fresh air and exercise.


I had taken my 'Chance Made Good'.
Posted by William Serjeant at 12:06 pm