Icicles and the Ice Fairy 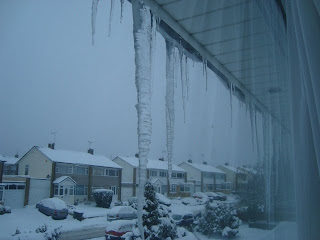 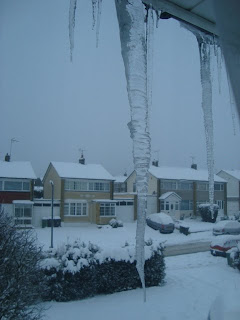 In a recent Blog* (Tuesday, 30th November) I mentioned that the Ice Fairy had transformed my garden into an Arctic fairyland of sparkling, shimmering brightness. Snow lay several inches thick and a piercing wind from Siberia imparted a smooth crispness to the surface.


Yesterday, the cold-hearted Fairy waved her wand again to bring a warmer waft of air with the express purpose of melting some of the snow before cruelly freezing it again. By this cunning ploy she hoped to wreak havoc; for nothing is worse for motorists than having to drive over white ice, i.e., black ice disguised by a layer of snow. This solidified, lethal frozen liquid lies hidden beneath the snow; the unsuspecting driver discovers he has lost control of his vehicle which slithers and slides until it ends up at the side of the road, or by good fortune continues in the direction the driver intended.


On opening my curtains to survey the scene early this morning I was surprised to see long icicles hanging from the guttering above my bedroom window. I was reminded of the blizzard of 1963 when the Country was paralyzed by thigh-deep snow, and icicles three feet long precariously dangled from guttering and power lines. I’m even old enough to remember the bitterly cold weather of 1947 when I went tobogganing with my friends and my hands felt like blocks of ice. I certainly remember the pain when their circulation was revived.


Later in the morning my daughter arrived in her car with her three children. They were appropriately dressed in snowsuits. She remarked that she had had difficulty in manoeuvring her car into the driveway because of the thick snow and ice. The car became stuck through loss of traction. The remedy was for me to shovel the stuff away, which I did, and I felt better for the exercise, but when she came to leave, the car still would not budge because the snow and ice directly under the wheels had impacted. No matter how she controlled the revs, her car remained put. The solution was for me to push the vehicle at the same time she gently reversed. Hey presto! Off she went, but I noticed a balding tyre, and pointed it out to her.


Incredibly, her car had passed its MOT only the day before! On her arrival at home, she examined the tyres and confirmed that despite having paid for a new nearside front tyre, it had not been replaced. Can you believe that this could have happened?


At least, the matter can be rectified. Meanwhile, the beautiful, but deadly Ice Fairy continues casting her spells, intent upon wreaking more havoc, even disaster and loss of life.


Never trust a pretty maiden with a cold heart!


(Please note that I do not believe in fairies, even Fairy Godmothers, except for the panto variety.)

http://www.netweather.tv/index.cgi?action=other;type=famwint;sess
Posted by William Serjeant at 10:40 am