There’s no way I can make practical progress by building ‘Sharpy’ at the moment; the weather is far too cold for me to work in the garage, but as soon as the outside temperature rises to about 10 degrees Celsius the heating will be sufficient for raising the temperature within the garage to the critical 15 degrees for epoxy.


Progress is being made in other ways; for example, I have given the go-ahead for having the metal parts made and for having the sail cut and sewn. Getting a quote for the metal parts required some persistence on my part, because the firm who has agreed to manufacture them has been flush with orders! After six weeks of worrying* them, they have finally given me a quote and agreed to do the job. A local sail loft at Burnham is very pleased to cut and sew the sail, which should be finished by the end of March, 2011. 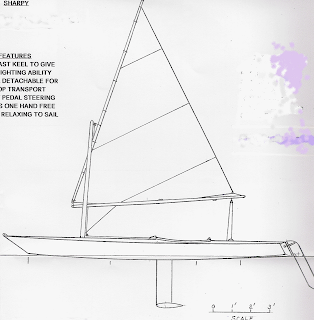 The important parts for further progress are two pieces of aluminium that sandwich the plywood keel and the pintles for the rudder. I need the aluminium pieces for ascertaining the final thickness of the keel so that I can build the keel box with the correct dimension for the slot. I want the pintles fairly soon, to avoid delay when it comes to attaching the stern deck. I cannot fit the deck until the pintles have been bolted onto the transom.


When building a boat, it is important to assemble each part within the planned sequence. However, there are items that can be made at any time, such as the rudder, the spars and the sails. In this respect, the Douglass fir for the boom arrived a few days ago. I shall need to have space for shaping the wood by using a plane, which will mean working out of doors, because there isn’t room in the garage. I’ll be able to work outside when the temperature reaches 10 degrees, which will be ideal for keeping me cool as I labour at the task.


The temperature for the weekend has been forecast to rise; therefore I may be able to start shaping the boom on Saturday.


*The Importunate Widow (What pestering can achieve.)