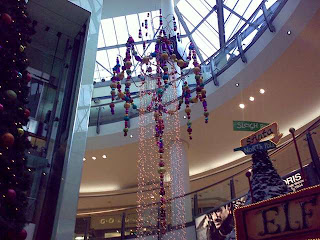 I always thought Lakeside was a big out-of-town shopping mall by the M25 where it crosses the Queen Elizabeth 11 Bridge between Essex and Kent, but today on visiting the complex I discovered Santa in his grotto at the North Pole! This was news to me, because I thought he lived in Lapland with gnomes and pixies that made all the toys there ever were. The signs at Lakeside showing the way to Santa’s grotto clearly led to the North Pole. 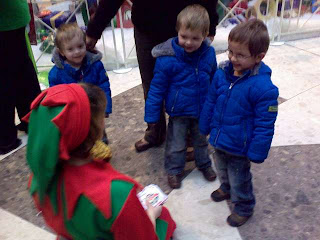 My three young grandsons wanted to see Father Christmas to ask him for the toys they would like this Christmas. Dutifully, their Nanny and I took them by car to the frozen North in search of the bearded gentleman they had dreamed of overnight. First we had to pass through Santa’s garden which was full of strange things, including pixies dressed in green and red costumes. They entertained the tiny trio and introduced them to the Man himself who was almost hidden behind a flowing white beard. 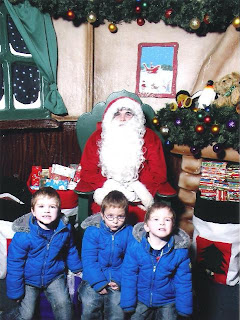 Being the real Father Christmas, he knew their names and spoke to them in a quiet voice. Attentively he listened to what they had to say, but made no promise that he would attend to their requests. Instead he told them to be good children, so that their wishes may come true. ‘twas a very solemn and serious moment that was recorded by the pixie camera. Later there were smiles all round as Santa presented each child with a colourful parcel. 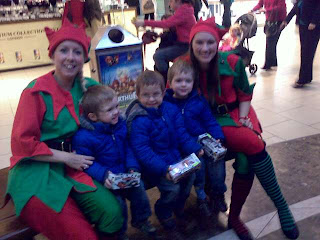 Outside of the grotto there was no restraining of tiny hands itching to discover the contents of the packages. One contained a shiny, red racing car, and from the others, there were identical silver cars. Father Christmas had cleverly chosen the very things the boys would like. 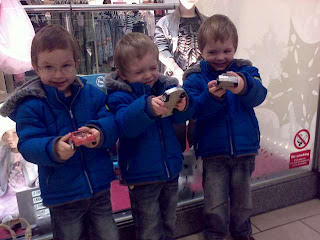 Posted by William Serjeant at 8:48 pm