Cadets being Prepared for Racing 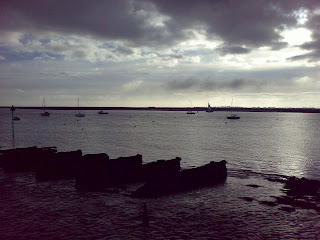 
‘Ladybird’ was set aside for her winter hibernation on Saturday, 30th October. Since then there have been gales and snow; therefore I thought it would be prudent to check her over. Accordingly I motored to Burnham-on-Crouch and had a look at her. She had been taken off the trailer that the boatyard people had used when craning her out of the water, and placed on four blocks, to keep her off the ground. I was a little disappointed that she hadn’t been chocked higher, because I had requested this to be done. Obviously, the message had not been communicated to the men who moved her. Unless she can be lifted higher, I shall find the job of antifouling her a bit tricky.

Still, I must not grumble, because until now all of my requests have been carried out, and no doubt if I ask for the boat to be raised further off the ground, the guys will do it.

I was relieved that her covers were in place and that they were doing their job of protecting the yacht from the elements. Ice and snow are particularly bad for her, because they strip off the varnish, leaving the bare wood vulnerable to attack by rainwater.

That Saturday, was bitterly cold, but after checking the covers, I thought I would have a walk beside the river, as far as the Marina. Only a few hardy souls were out sailing - mostly youngsters racing their Cadets. The majority of moorings were vacant. The river looked rather forlorn, and there was a distinct lack of sunshine. Those fine summer days I spent sailing at Burnham seemed far away. I could only dream of summer days to come in 2011. Maybe by then my new boat will be finished, and I’ll have fun sailing her, but now, it’s far too cold to work on her.