Appraisal of 'Faith' my Paradox Sailboat 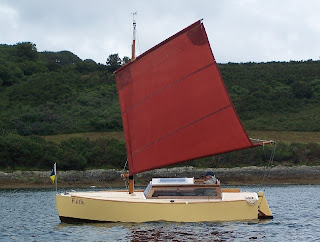 It took me a year and a half to build my miniature coastal sailing cruiser. She had a few unusual features that appealed to me, such as her chine runners and her standing lugsail that could be reefed by rolling it around the boom. Another valued attribute was her enclosed cabin with all-round visibility that enabled me to control the vessel from within, so that I was protected from the elements, no matter how tough the going got. Although she had a flat bottom with considerable rocker she was self-righting and her shallow draught of only 9" allowed her to sail to windward in 2' of water. An advantage of her flat bottom was her ability to sit upright on a beach – especially useful when her skipper needed a good night’s sleep.


This remarkable boat designed by Matt Layden was only 13' 10" long and just over 4' wide. When fully ballasted her displacement was 1410 lbs, of which 397 lbs were lead ballast and 154 lbs were water ballast. Because she was no larger than a medium sized dinghy she could be transported on a road trailer. I actually used an un-braked trailer linked to my Ford Mondeo family saloon and I found this combination worked well. I did the 600 mile return journey to Falmouth from Southend-on-Sea without difficulty. 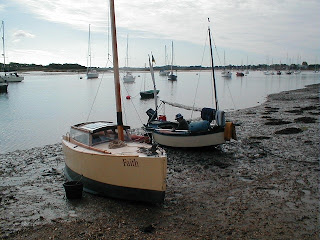 My first test sail took place on the River Crouch at Burnham where I launched ‘Faith’ from the fairly steep slipway of the marina. On the first day the wind was light, and I found that she performed flawlessly on all points of sail. I was delighted with how she tacked between the many moored yachts. Under those benign conditions with smooth water and a light wind I could hardly perceive signs of leeway, there being barely a visible wake, presumably because her underwater sections presented little resistance to the water.


On the second day, conditions were lively, since the wind was in the region of Force 3 to 4 from the west, gusting to 5 or more. The flooding current of 1 ½ knots was against the wind which resulted in waves with breaking crests, the distance between them being approximately the same as the overall length of the boat. You can imagine the effect this had on her, and there was a moment when she failed to come about when changing from being on the starboard tack to the port tack. Fortunately I had sufficient room to wear 'ship' by bearing off and running downwind before gybing. She was very slow to come around because of the pressure of the wind on her sail. I had too much sail up for the conditions. When appropriately reefed she would even bear off when the sail was sheeted amidships. 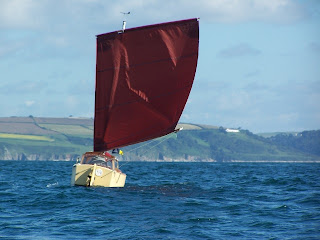 A noticeable characteristic of Paradox was her slowness when tacking, particularly when the water was choppy. She would need to be sailed around in a smooth arc. Suddenly changing the angle of her rudder would not result in her coming around, as would be the case with a lightweight dinghy; instead her rudder would simply act as a brake. Because her mast was set to port of her centre line and her sail was hung to the port side of her mast, the resulting drag on that side could make tacking from starboard tack to port tack problematical, but if the boat was not tacked until she was moving fast there was every chance the manoeuvre would be successful. I learnt a technique from Al Law that he used when the water was choppy. He released the sheet when the boat was headed into the wind, and at the same time he would move forward into the cabin on the starboard side. I'm not sure why this worked, but by releasing the sheet, the sail feathered into the wind, and his weight being further forward, correspondingly brought the centre of lateral resistance forward, which facilitated the completion of the tack.


I next tested 'Faith' while on a fortnight's cruise in the West Country. There she was sailed under varying conditions when she was fully loaded with provisions. At that time I had not carried out modifications to her yuloh to improve its articulation from side to side and therefore I could only use it as a paddle. (Later when I got it working properly I could generate about half a knot in smooth water.) Al and I sailed in company much of the time, which led me to believe his 'Little Jim' generally went to windward more efficiently than 'Faith'. Overall, there didn't seem to be much difference in the boats' performance, because after sailing all day on open water we would arrive at our destination together.


I found my Paradox behaved wonderfully well in winds of force 4 to 5 when sailing along the coast between Plymouth and Salcombe. There were times when our boats were hidden in the troughs of the Atlantic swell, and when we entered Salcombe, the seas were confused because waves were rebounding off the cliffs as we approached the infamous sandbar. After leaving Salcombe the next day, en route for Brixham I felt very secure in my little boat as she ran before the wind. Unlike some boats I've owned, 'Faith' hardly rolled when running, and I believe that was because of her flat bottom and chine runners. 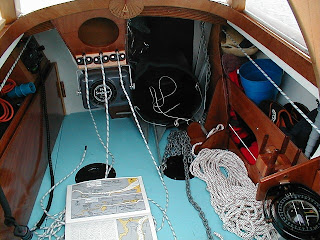 The boat had ample room for provisions. In fact, I believe she had enough stowage space for an ocean crossing. She could dry out and sit upright without requiring supports. There was room for a full-size single mattress, and of course, there was no need to erect a boom tent. Before turning in for the night, I simply closed her waterproof hatch. Condensation was not a big problem, because of the flow of air through the ingenious waterproof vents, and for those who chose to insulate their boats with closed-cell foam, it provided an additional defence against condensation while acting as buoyancy in the unlikely event of the boat being holed. In the lazarette, behind the removable transverse seat, there were bins for warps, fenders, pots, Wellington boots, wading shoes, vegetables etc., plus a gimballed Gaz stove. I could use this while underway for heating water, and even for cooking a meal.


The tiller was attached to a steering line that passed through blocks so that I could sit facing forward while using it to steer the boat. Either side of the cabin, below the line, there were handy shelves. Under them there were compartments for bulkier items. Food was kept under the floorboards. The battery was located in the forecastle on the port hand side opposite a storage bin on the starboard side. Between the stem and the first bulkhead there was yet another storage bin, which I used for items that I seldom required. I built a transverse table that could be set up before or after bulkhead three. I found it useful when having a meal and when using my laptop computer. 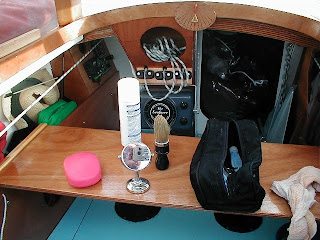 All in all, I was very pleased with my little boat, believing she would be ideal for the sort of sailing I envisaged for my retirement. Mostly I intended to use her for day sailing and the occasional short coastal cruise. I thought I would equip her with an outboard motor because of the limitations of the yuloh.


‘Faith’ was later fitted with a Honda 2.3 outboard, which served her very well when she cruised along the south coast of England to the Scilly Isles.


This article is a revamp of one at my old Paradox Sailboat website.