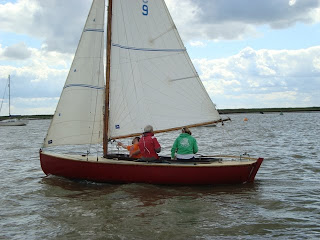 
I moved to Essex from the West Country in 1972, and from that time much of my boating has taken place on the River Crouch. Even before setting up home in Essex I had sailed on the River when I was employed as a sailing instructor by the Central Council for Recreation. This organisation sponsored dinghy sailing courses based at the Royal Corinthian Yacht, Burnham-on-Crouch. Students were given practical instruction on Wayfarer dinghies.


I remember being very impressed with the Royal Corinthian One Design keelboat racing. The boats were in tiptop condition and their owners obviously enjoyed the competition. Remarkably, several of these boats still race today. The Class 70th Anniversary took place in July, 2005.

This corrects the error I made with the photo above which is of a Royal Burnham One Design, not a Royal Corinthian One Design.

‘Cormorant’ was for sale
http://www.boatshed.com/royal_corinthian_one_design__cormorant-boat-74362.html
Posted by William Serjeant at 12:08 pm

Dear Bill's log. Sorry to correct you, this is a Royal Burnham One Design. She is Whimbrel No 9. She was successfully raced by two doctors. The class was commissioned in 1934 and is still going strong.

Thanks chudgrower. I have added a note to this effect which takes readers to: