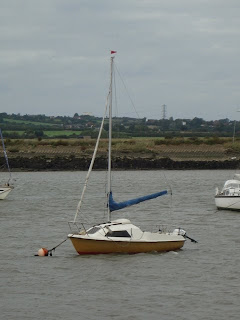 I think this is a Mark 11 'Skipper Mariner' with twin retractable keels.

The Skipper 17 trailer sailer was designed by Peter Milne who also drew the plans for the Fireball racing dinghy. Skipper 17s went through a number of transformations from the time when Richmond Marine produced them in the late 60s. The original boat was in the form of a day sailer that had a small, unobtrusive cuddy up forwards. She had a capacious cockpit, large enough for a crew of six, and she was fitted with a heavy retractable steel plate that was housed in a centre case. In the early 70s she was given a different cuddy that was rather bulbous, and in my opinion it looked completely out of place - even ugly! This version was marketed as the ‘Skipper Mate’.


In 1972 the whole superstructure was revamped, so that she had a larger, more conventional cabin placed more or less in the middle of the boat. Unfortunately, the width of the cabin top only left very narrow side decks that didn’t lend themselves to easy access by her crew to her small foredeck. Getting forward to do anchor work, or to pick up a mooring, was not the easiest or safest of activities. Valuable interior space was taken up by the centre case moulding which was slap in the middle of the cabin. Later, when the boat was updated, this annoying obstacle was removed and replaced by twin bilge plates. At that time she was marketed as the, ‘Skipper Mariner’.

In 1992, Richmond Marine relinquished their ownership of the moulds, and sold them to Morton Marine who redesigned parts of the boat. They added an inboard well for an outboard engine, and gave her an adjustable backstay. She was re-branded as the ‘Eagle 525’, but that was not the end of the story, because in 1999 they added more ballast, and increased her sail area. By then she had undergone many transformations, so that she had evolved into a boat that I would describe as a capable, small coastal cruiser. I would label her as a boat that can be transported by road trailer, rather than a trailer sailer. Sadly, production ceased in 2003.

Photos of a Skipper 17
http://www.caleyboats.co.uk/125/Sail-Craft-for-Sale/Skipper-17-Trailer-Sailer-with

Can anyone tell me of a Skipper 17 for sale? Been looking for some time ,but not many about this far from salt water.(Herefordshire)07761 823584

Can any one assist me towards purchasing a skipper 17 in reasonable nick with roadworthy trailer?This far from salt water not many about.