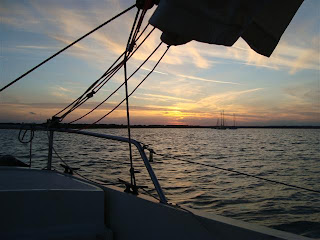 
High water was shortly before 0830, which meant another early start. There was hardly a breath of wind as we left our borrowed mooring at Leavings Creek. We fired up the outboard at 0730, and as always it performed flawlessly. The prop laid a trail of bubbles in a rippling wake that fanned outwards on the mirror-like water. Gulls feeding at the water’s edge were disturbed when wavelets reached them and they reacted by taking to flight and making raucous calls.

Five minutes later ‘Ying-Tong’ turned into Woodrolfe Creek which has several cuttings where small craft nestle beside wooden pilings and jetties linked by walkways across the marshland. Yachts, motor craft and dinghies sporadically headed out from Tollesbury Marina at the far end of the Creek. We tied up to an open motor launch that was moored to the reception pontoon, and there we took off gear that was to be loaded into John’s car. He launched his open canoe from the slipway and tied her astern of the yacht; then we motored to the cutting where his mooring is.

Until that point our trip from the Medway had gone according to plan, but on entering the entrance of the cutting, ‘Ying-Tong’ came to a halt. She had slid firmly into the mud under her twin keels. No amount of pushing with oars could free her, and the water was no longer rising. Therefore John took a line to a nearby mooring in the fairway where he remained in his canoe until I hauled the boat off the mud. There was no way we would have been able to reach John’s mooring on that neap tide. The only alternative was to tie the yacht to a vacant mooring in Woodrolfe Creek. Even if we had been able to reach his mooring, another boat was occupying the space.

Apart from the aforementioned hiccup, the delivery trip across the Thames Estuary had been a success and an enjoyable experience for us both.
Posted by William Serjeant at 9:38 pm