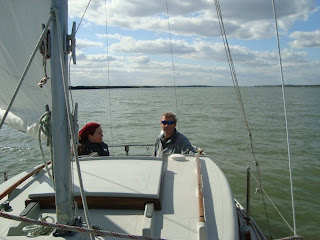 Ambling down the River Crouch

The weather has not been all that kind lately, but the sun shone yesterday afternoon when three of us had an enjoyable sail aboard ‘Ladybird’. We ambled down the River Crouch to a point beyond the entrance of the River Roach, where we messed about sailing the boat on various courses. We also practised reefing, not because it was rough, but to because it was a good time to familiarise the crew with how it should be done.


‘Ladybird’ has been afloat since April, and she has sailed many miles; consequently the leaching antifouling has lost some of its effectiveness, particularly along the waterline. Therefore, when we returned to the mooring, we used the ship’s long-handled scrubbing brush to good effect. This was done without a great deal of effort by a volunteer who sat in the dinghy and worked his way around the boat.


After that minor chore we relaxed in the cockpit, drank coffee and ate chocolate bars. Then the Rice and Cole boatman gave us a lift back to the pontoon. We had had a very pleasant sail and a super afternoon out on the water.
Posted by William Serjeant at 12:17 pm