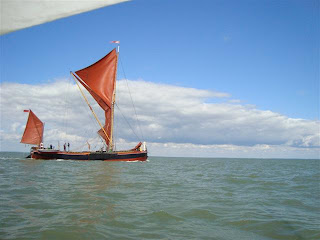 Thames barge that overhauled us 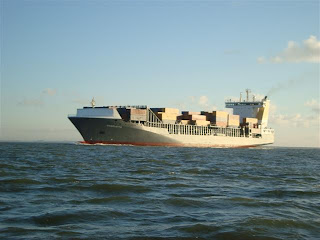 
We had a sleepless night at Queenborough and rose at 0530 for breakfast. At 0630 we were underway for Sheerness and the dredged channel to the north of the Montgomery wreck which is full of bombs from the war. From there our course took us to the South Shoebury Buoy. En route we dodged a couple container ships heading up the Thames. Progress along the edge of the sands to the NE was good because the ebb was helping ‘Ying-Tong’.


We arrived at the Swin Spitway Buoy just before slack water, and headed for the Wallet Spitway. From there our course towards the Nass Beacon brought the wind onto our starboard quarter, so that with the aid of the flood tide the boat was doing 5 knots.


There was a bit of interesting pilot age into Tollesbury Creek which leads to the Marina. About a half mile before the Marina we picked up a vacant mooring. There, John attempted to take photos of nearby egrets. By using a telescopic lense coupled to his sophisticated Canon camera he got at least one shot of an egret.


We intend to stay the night in the Leavings Creek so that we can get over the sill at Tollesbury Marina on Saturday morning. There we can offload gear before motoring the yacht to John’s mooring to complete the delivery trip.
Posted by William Serjeant at 6:02 pm