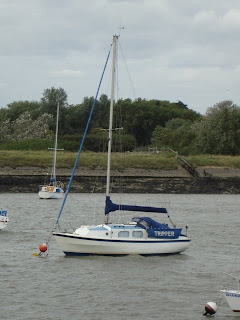 'Tripper', at Hullbridge (I think she's a Centaur, but I'm not sure.)

Arguably, the 26’ Westerly Centaur was the most successful UK coastal cruising yacht ever. Why was she so popular? Not only did she have spacious accommodation with standing headroom, but her performance under sail and motor was very good.


She has a history dating back to 1968 when Laurent Giles designed her for mass production by Westerly. One of the keys of her success was her towed in, splayed out bilge keels that not only helped with windward performance, but gave her stability when dried out or on the hard. The early version had an unsupported spade rudder and circular ports at the forward end of her cabin trunk, and the later version had a skeg hung rudder and rectilinear ports at the forward end of her cabin.


Her hull form and generous ballast made for a very stable boat, and along with her massive GRP mouldings she gave a reassuring feel to those who sailed her. There were three internal accommodation options, the favourite being the ‘B’ layout which had a long fore and aft table, which was offset to port from the centre of the cabin, and a galley forward to starboard. The ‘A’ layout was similar to the ‘B’ layout, but this option had a dinette arrangement to port. The ‘C’ layout was as per the ‘A’ setup, except the galley was by the companionway on the starboard side.


Her spacious deep cockpit provided security for her crew and her generous side decks with high guard rails made for safe deck work. She was no sluggard, either under sail, or when being powered with her diesel engine. Most Centaurs were fitted with 25 HP Volvo engines, some with 13 HP Volvo engines and others with Watermoto diesel engines.


The production of Centaurs ceased in 1984, after a run of about 2500 yachts. Today, many abound in good fettle, and second-hand bargains can be found. A trawl of what Centaurs are on offer through brokerage services would seem to suggest the average asking price is around £10,000 to £12,000, although much will depend on the state of the boat. If one is prepared to put in some tender loving care on renovating a Centaur, the possibility exists of finding one for as little as £5,000.


Short Video of a Westerly Centaur sailing in Cardigan Bay

http://www.youtube.com/watch?v=4iJT-8UUnJk
Posted by William Serjeant at 10:29 am