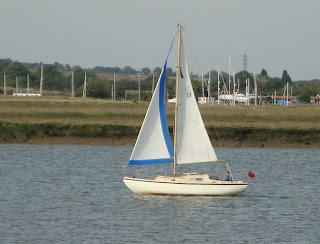 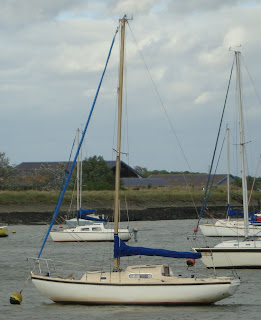 At her Hullbridge mooring

Colin Mudie designed the hull of the Wing 25 fin keel yacht in 1964, and E. G. van de Stadt designed her superstructure. She was built by a number of different manufacturers and I recollect she was available in kit form from a yard at Canvey Island, Essex. A member of the Up River Yacht Club bought a hull and deck moulding from that yard for Wing no. 51 and fitted her out - that must have been in the late 70s. Today, the same yacht has her mooring adjacent to the U.R.Y.C. where she partially dries out at low water when there is a spring tide.


The production of Wing 25s finished in 1981 with the Mark 1V version. Mark 1s had keel hung rudders, but later boats were modified by being fitted with skeg hung rudders for better handling. The long overhangs at bow and stern made for sea kindliness, but resulted in reducing her waterline length to 18’. With an excellent ballast ratio, and minimal wetted surface she sails well to windward, and of course, on that point of sailing, her waterline length is increased, on account of the yacht heeling. The rule of thumb is, the longer the water length the faster the vessel, and Wing 25s are no slouches. I believe I’m right in saying that they have standing headroom at the companion way.


Sailing the Web info page for the Wing 25