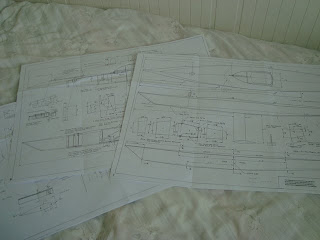 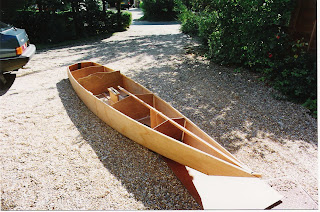 The awaited boat plans arrived, as I expected they would on Monday morning. Derek Munnion, the designer of ‘Sharpy’, was as good as his word. I couldn’t open the package immediately, because I had other things that needed doing. By Monday afternoon the excitement built up. I carefully inserted the opener under the flap of a large brown envelope and purposefully slit it open. Inside, there was a folded package of crisp white drawings, plus a letter and a few sheets of printed paper along with a photo of a partially built boat.


I spread the drawings out on my bed and examined them, starting at sheet 1. At first I was a little awed by the delicate and precise graphics. I did not understand everything at a glance, and I began to wonder if I had taken on more than I could chew, but bit by bit things became clear as I compared one diagram with another. The whole picture fell into place, and I was able to grasp the three-dimensional aspects of the boat’s structure. The more I looked at the drawings, the clearer my understanding of them became. Then I realised that building ‘Sharpy’ should be easier and quicker than any of the boats I had recently built, but that remains to be seen.


Some parts are fashioned from stainless steel - things like the retaining pins for the lead ballast at the bottom of the keel, and the rudder fittings. Unless I can find a way of substituting them for proprietary parts, I’ll have to have them made by someone who has the skill and equipment to do it. The sail should not be too difficult to cut and sew, but I’ll reserve judgment on that. I may have it done professionally.


I shall need to tackle things in turn. First, order the plywood, timber and adhesive; next shape and assemble the components of the hull, and while this is being done, work at getting the metal parts finished. The spars are nothing special, and they should not require a lot of effort to make. After building the keel and rudder, and a few other subsidiary parts I shall only need to paint the boat. Hopefully, if all things go well, my ‘Sharpy, should be ready for the water by mid or late summer of next year.
Posted by William Serjeant at 3:33 pm

- Bill - At first I was a little awed by the delicate and precise graphics.
- Ferdinand - You're right Master Bill, the plans of a sailboat are some of the most charming images in the world. A work of art. That’s why the Penobscot Marine Museum consider the designer plus the shipbuilder as true artists and a sailboat ready to sail, as a masterpiece. Look! (http://www.oldsaltblog.com/2010/11/05/artists-submissions-for-the-art-of-the-boat/)

Bill - Hopefully, if all things go well, my ‘Sharpy, should be ready for the water by mid or late summer of next year.

Fernando - Here's an expectation that makes the whole construction effort worthwhile. Have a new boat to sail during the next summer. Good luck master Bill. I hope you...