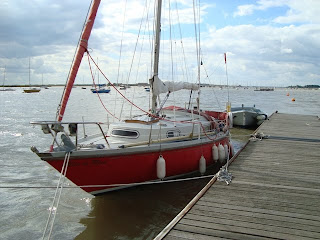 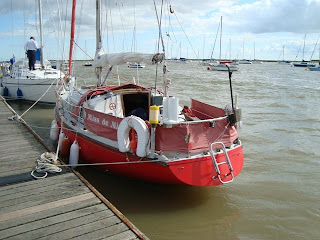 ‘Ladybird’ had been on her mooring for a fortnight since I last saw her; therefore I checked her out today and found that all was well.

Back at the Rice and Cole pontoon, I noticed that a Mystere Flyer 26, ‘Miss de Mina’, was berthed alongside. About three weeks ago I spoke to her owners when they were preparing for a cruise to the Medway. This time I asked them how they got on. They replied that Hoo Marina had become badly silted, and as a result they had to make an exit earlier than they had wanted; this was because of the silting. They had had to leave the Marina at four o’clock in the morning, and because it was dark they had difficulty in finding the withies that marked the narrow channel.

I later discovered that according to the Marina website, access in and out of the Marina should be available from 3 hours either side of high water, which caused me to wonder what depth of water one could expect there at neap tides. I can understand the owners’ concern, because a Mystere Flyer 26 draws 4’ 7”. That’s not too outrageous for the East Coast, but when the boat has to settle into soft mud, those aboard would be conscious of a fair amount of squelching, which was the case with the crew of ‘Miss de Mina’.

I noticed that the yacht has wheel steering, which is quite nice, because her helmsman has a good view forward. On the other hand, boats that I’ve sailed with wheel steering gave me little feedback, unlike those I have steered with tillers. At 26’ she has good accommodation, including the comfort and convenience of a dinette. I am told that she has a good performance to windward, which is due to the shape of her hull, her fin keel and skeg rudder.

When I got home, I searched the Internet for Mystere Flyers and I discovered that ‘Miss de Mina’ was for sale!