‘Within’, Greg Kolodziejzyk Pedal the Ocean 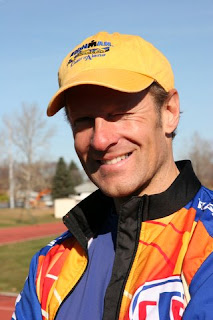 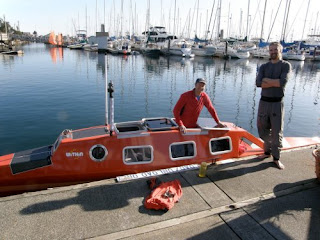 
Yesterday I touched on the topic of the Jester Challenge 2010, which is a Race across the Atlantic for solo sailors in sailboats between 20 and 30 feet LOA. Generally, competitors will not be racing hi-tech yachts especially designed as racing machines; they will in the main be very ordinary cruising yachts, the sort used for coastal sailing, such as the Contessa 26, the Corribee 21, the Twister 28 and the Wharram Tiki 26. These sailors will not be sponsored, nor will they be racing for a coveted prize, but each of them will be highly motivated to undertake the demanding task. Their boats will not be packed with electronic gadgets, nor will they receive assistance from shore-based advisors, but every competitor will have fully prepared himself and his yacht for the challenge of his life.


Greg’s challenge is unique, because no one has ever used his own human power to pedal a vessel across an ocean. ‘Within’ is a large canoe-like boat that has two cabins: one for her solo crew to work the boat and the other for sleeping in. She is powered by a propeller which is connected to a foot pedal driveshaft, of which there is a replica stowed aboard in case the primary one should fail. In fact, this is Greg’s forte, i.e., preparedness. He has fully prepared for possible eventualities, for example, ‘Within’ is equipped with a sea anchor, an emergency locator beacon, a SpiderTrax tracking device, spares of things like GPS units, water makers and he has more solar panels than he thinks he’ll need.


His solar panels are rated at 250 watts, and he knows for sure he can get by on 110 watts, but that power will have to operate an array of electrical gadgets such as, a satellite phone, an Autohelm, a Raymarine GPS coupled to an AIS receiver, a two-way radio, a fan unit, a computer, and an Ipod with a video facility. In case his solar panels do not perform as expected he also has a wind generator that can be mounted on the cabin top.


It is Greg’s hope to set a speed record for others to better. He has allowed himself 80 days at most to pedal his craft from Vancouver to Haiwaii, which amounts to a total distance of 4,500 kilometres. He would be chuffed to do it in 40 days, but if he were to sleep 7 hours a day and pedal for 17 hours in every 24 he would need to average 6.6 kilometres an hour, i.e., 4.1 miles per hour. To that end he has been practising in the boat under simulated conditions and on the water with sea trials along the inshore stretch of Vancouver Island. Tomorrow he is due to set off on his offshore trial in the company of his safety vessel. This yacht will accompany him when he does the actual record attempt in June.


He certainly cannot be faulted when it comes to being fully prepared, even to the extent of building a prototype boat named ‘Tofino’ which did not come up to mark. Hence he rethought the whole enterprise; instead of attempting to cross the Atlantic Ocean, he opted to pedal from Vancouver to Hawaii. He has sought the very best of everything to succeed, including the designer of the boat, naval architect Stuart Bloomfield and Rick Willoughby, an experienced marine engineer. The result is a state-of-the-art lightweight high performance machine capable of reaching speeds of up to 9 knots under the right conditions.


Greg is not undertaking his adventure purely for selfish reasons, because he has an altruistic nature, being a man who cares for the less privileged. To that end he invites his sponsors to donate $50 dollars per mile, and for each mile he pedals ‘Within’, the Kimberlee’s Bikes for Kids Charity will donate one bicycle to a deserving child. The aim is to promote general physical fitness and to reduce obesity. Greg’s primary mission is to encourage youngsters to be more physically active for better health and to encourage us all, irrespective of age to adopt this ethos and put it into practice.

He is not the first, an Englishman called Jason Lewis was the first to pedal across an ocean in a similar wooden boat called Moksha. He went right around the world from 1993-2007 in a very eventful trip. Similar shape boat to Within but much lower tech and budget. See http://www.expedition360.com

By the way great blog, I often come here for the specifics of Microcruisers. Thanks!