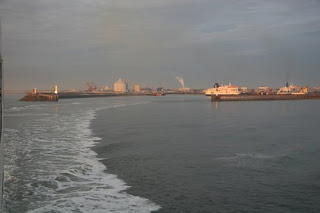 There was nothing much to distinguish this day from another, except that the wind veered from northeast 4 to east 6, which was very much in our favour while sailing from Zeebrugge to Dunkerque. With tide and wind helping ‘Apple Charlotte’, her average speed over the ground was an incredible 6 knots!


We were at Blankenberge by 0905 hours, and over the Stroombank between Ostend and Nieuwpoort at 1025. There we had to keep clear of a colourful fleet of Dragons engaged in deadly combat. They were probably based at the Ostend North Sea Yacht Club. By 1450 we were approaching the entrance of Dunkerque Harbour. Having made it safely into the Harbour we had a bit of trouble trying to find a berth. Altogether, we were shifted three times before we were allowed to raft alongside another yacht. I guess the Harbourmaster was pretty busy, because it was the height of the season. In the process of moving our boat, my brother sustained a painful head injury when he caught his forehead on the end of the boom of another yacht. He made a note in the log that the resulting lump resembled a grade 3 egg!


After an early evening meal we took a stroll through the town, and while doing so, we did a bit of window shopping, principally to compare prices with those at home, especially house prices. We couldn’t work out why the air was so cold at the beginning of August. On returning to our boat, we made large mugs of Hot Chocolate to help warm us, then we turned in for the night. The wisdom of drinking so much liquid before taking ‘shut-eye’ was open to question. There’s no mention in the logbook about the number of times we had to visit the loo as a consequence.


Having heard a good morning forecast which told of a zone of high pressure at German Bight, with the possibility of fog patches, the Up River contingent motored out of the Harbour. The time was just before seven o’clock. There was very little wind, and we were greeted with a sea mist. Our purpose was to sail to Calais, which would be our point of departure for Dover the next day. The engine was doing sterling work, but refuelling every hour was a bit tedious. Monotonously we powered from buoy to buoy, marking our progress on the chart, but at 0805 the propeller became fouled with a plastic bag. Cutting it free was an easy job, and away we were again, this time trailing a mackerel line from the stern. The sun broke through the mist and it soon cleared. Lo and behold! There on the line, was a glistening mackerel – not enough for a proper meal, but we cooked it nevertheless.


Late that morning our contingent tied up to a large visitors’ mooring buoy in the Calais Arrier-Port, south of a quay where cross-channel ferries berth. A more uncomfortable situation you couldn’t imagine. Every time a ferry arrived and left the harbour, torrents of water swirled over the shallows, causing the yachts to gyrate around the buoy, while banging into each other. Care had to be taken to make sure crosstrees and rigging did not clash together. Our situation guaranteed an awful night, but I for one did not want to be restricted by the tide, had I chosen to take ‘AC’ through the lock to the Bassin Ouest and moor at the Yacht Club. That evening, the Calais yachtsmen welcomed us at their Club where we spent a few cordial hours, but later, we suffered a tortuous, noisy night, one I would rather forget.
Posted by William Serjeant at 9:37 pm