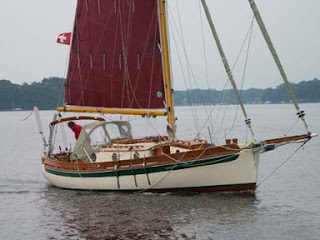 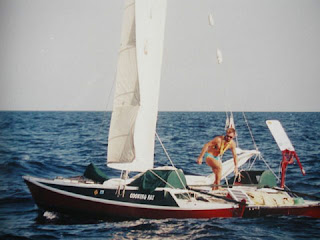 The single-handed crossings of oceans by sailors, both male and female, are almost commonplace these days, but the oceans have hardly changed since early voyagers risked their lives while attempting to cross them. I suppose some of the earlier ocean seafarers were those who left the shores of Morocco, circa 3000 BC in search of new lands. These mariners aboard their ancient reed craft sailed and drifted across the Atlantic. Their route was largely determined by the prevailing winds and currents which took them to the Americas, or so Thor Heyerdahl believed. To prove the viability of his theory, he and seven crewmates sailed a replica craft to Barbados in 1970. They took 57 days to complete a crossing of 3,270 miles.


The story of ocean seafaring is well documented by historians from the 6th Century, when Procopius described the double-ended dhows of ancient India and he told of their voyages. Others have chronicled the likes of Leif Ericson who voyaged from Norway to Greenland in a wooden lapstrake longship. This voyage of discovery and resettlement took place approximately five hundred years before the historic crossing of the Atlantic by Columbus in 1492 aboard the ‘Santa Maria’. From those times, sailing vessels have ‘evolved’ because of emerging technologies. We live in this exciting age of new man-made materials which makes it possible for us to build vessels lighter, stronger and larger than those of our forefathers, but don’t let us be carried away by thinking we are gods who can overcome the oceans by our technologies.


Those who have crossed oceans can give testament to their vastness and the power of wind and waves. For most, the experience is very humbling, and they are amazed at the creatures they encounter, whether flying fish, whales, sharks, birds and the sights they see: sunsets, clouds, waves and even waterspouts. Of the 90 entrants to the Jester Challenge Race to take place this year, I doubt there is one who will be totally reliant upon technological gismos to get him across the Ocean. They will be sailing in the spirit of the ancient mariners, reliant upon their own resources. They will not have the ultimate, automated racing machine in which their role is to monitor instruments, press that button and be guided by onshore weather gurus. These are the true Corinthians who will come face to face with challenges, and have opportunity to test themselves and answer the question, “Who am I?”


The third Jester Challenge for single-handed yachts, under 30 feet, leaves Plymouth at 1300 BST on 23rd May 2010. This will be the 50th anniversary year or the first trans-Atlantic single-handed race.