The Islands of Baltimore


We were getting into bad habits by having breakfast at 0830 instead of 0630, but wasn’t it nice to relax and enjoy our sojourn in this beautiful place? The barometer was a steady 30 inches, characteristic of this cruise. As we were about to make sail for an exploration of the numerous islands we noticed there was water in the bilge. An inspection revealed a hairline crack of about two feet, along the starboard chine in the forepeak. Undoubtedly the fracture had occurred on Wednesday when the boat crash-landed in a trough between two waves. It took us until mid-afternoon to stop the leak by sealing it with a lath nailed over a length of canvass covered with Mastic. We first had to obtain the materials from Baltimore, as our bosun’s kit had not contained them. 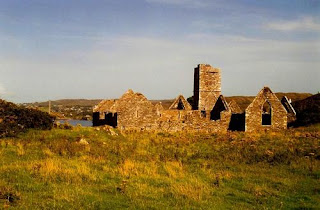 To test the repair we went for a sail around the islands and creeks of Baltimore Bay. Mackerel were in abundance, but we only caught sufficient for our needs, before anchoring at Abbey Strand at Sherkin Island. We had a stimulating walk for the entire length of the island from north to south. First we trekked to the Dock in the north and retraced our steps before continuing to Sherkin Point in the south. We saw breathtaking views of bays, headlands, islets and far-off mountains. There were derelict crofts, cows, a donkey and the Abbey ruins, and of course there was an abundance of all kinds of plants and fauna. We sensed a spiritual, mystical atmosphere that seemed to take us back in time to the fifteenth century, when the Franciscan monks who built the Abbey sought peace and communion with God in that remote island far from a troubled and fallen world.

We didn’t get back to the boat until 2145, after a full day of activity.


Although the barometer remained high, we sensed a change was taking place with the weather, as the wind veered from north to east-northeast. The Shipping Forecast predicted variable winds of force 1 to 3. At 0805 we sailed close to the Loo Buoy at the entrance of Baltimore Bay. An hour later we were able to set the spinnaker while sailing on a course of 138 degrees. The wind freshened from the southwest, but we could still keep the spinnaker drawing until 1800 when the halyard parted. Our average speed since leaving Baltimore had been 5 knots and we were 30 miles offshore. We set the small jib and Geoff prepared two mackerel we had caught as we left Abbey Strand. We saw a yacht about two miles ahead which seemed to be on the same course as ‘Pinto’, but within an hour we could no longer see her. At 2100 there was a rather fiery sunset which spoke of wet and windy weather to come. By 2200 the wind had veered so as to come from northwest, which was ideal for sailing to the Scillies, but constant attention was required by the helmsman to prevent the ship from gybing.


In the early hours of the morning we had an anxious time while trying to avoid three fishing vessels. Wherever we went they would pursue us! We lost a bit of time zigging about in an effort to avoid them. However, they remained with us until daybreak. During the dark hours, the phosphorescent wave crests had been a help when steering because our compass light remained out of action. For the first time in days, the morning was grey and cold, while a layer of cloud covered the sky. As time wore on, our spirits flagged - no doubt because of tiredness, constant movement and the unaccustomed lack of sunshine. Geoff’s self-steering system could not cope with the quartering seas. At 1510 a DF bearing of Round Island confirmed we were on course, and the log reading indicated we had sailed 118 nautical miles since leaving Baltimore.


Our hearts leaped for joy when we sighted the Bishop Rock Lighthouse at 1625. Our mood was transformed in an instant. The force 5 wind was coming from the northwest. Therefore it was prudent to maintain a course well away from the Islands before sailing down their eastern fringes. Meanwhile the clouds had separated into thunderous dark waterfalls cascading across the sky. We had lacked confidence to enter the archipelago between Bryher and Tresco. Discretion was called for because error could have proved fatal. In the lee, on the eastern side of St Mary’s, we expected the wind to ease, but on the contrary it seemed to increase, which caused us to have a hard beat towards Watermill Cove where we hoped to anchor. On our arrival there we saw that the anchorage was open to a swell from the north east. I have subsequently learned through experience that his phenomenon occurs because waves from the northwest somehow spiral around the Islands until they come from the northeast. Just when things were difficult enough, heavy rain bucketed down from a thunderous dark cloud. The wind gusted so that we had rather too much sail, causing the lee gunwale to dip under the water. 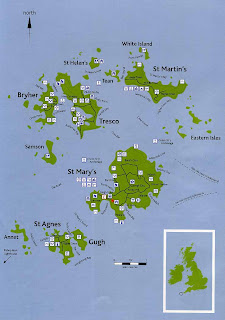 
We had not learned from our previous visit that we should anchor at Porthcressa, rather than Hugh Town when the wind is from the northwest. After a hard beat through St Mary’s Sound we arrived in the dark at the Hugh Town anchorage. As a precaution we prepared the bower anchor for letting go at a moment’s notice in case the kedge anchor dragged. Needless-to-say the boat rolled and pitched, as she was tossed by the waves and blown by the wind. The time was 2200. We were very wet and tired, so that all we could do before turning in was to make an omelette and be grateful that we had no longer to remain alert at the helm. We took turns to keep anchor watch throughout the night.
Posted by William Serjeant at 4:09 pm