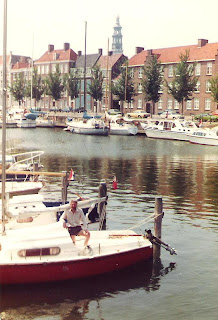 
The early morning forecast was for a north-westerly 3, but with fog patches. No sailor likes fog, and back in 1981we did not have a GPS to guide us. Never mind, we had a sounding lead, a Walker’s log, a DF set, a compass and a chart. We could use our ears and we had a fog horn. Maybe the fog patches would not come our way? The forecast for the north-westerly was ideal; therefore we cast off our mooring lines at 0640, and with the motor running, we made our way to sea by keeping close to the eastern jetty. Our purpose was to make sure we would not be a hazard to any ships entering or leaving the Harbour.


Buoys along that part of the coast were numbered with the prefix ‘E’, and having passed through the narrow entrance of the Harbour we headed for E 1. From there our course ran parallel to a gorgeous sandy beach, and by 0806 ‘Apple Charlotte’ was at E 10, which was northeast of the seaside town of De Panne. The sun was shining and we were making a good speed of 4.5 knots over the ground. Other yachts were following us, including Ken’s ‘Lamorna’ and a large ketch with the name ‘Shanspringer’. In time they gradually overhauled us.


All of this part of the coast was densely populated, and quite a few building were industrial, which to me was not at all appealing. I found it confusing trying to identify spires, towers and other landmarks to ascertain our position by taking bearings of them. However, ‘Apple Charlotte’ was heading to the northeast, and by following the West Diep channel buoys we had a pretty good idea as to where we were.


We easily identified Nieuwpoort when we were due north of the harbour. That was at 1000 hours. A couple of yachts were making their way to sea. An hour-and-a-half later our pretty yacht, with her red ensign flapping in the breeze, was comfortably berthed beside the pontoon of the Royal North Sea Yacht Club at Ostend. I can’t remember much about our short stay there. I certainly didn’t see much of the town. Other Up River Yacht Club yachts had arrived before us; among them were John with his Fairey Atalanta, Dave in ‘Dinky Too’, and Ken on ‘Lamorna’. That evening we gathered at the ‘Mother Ship’, Dave’s spacious home-built Colvic 26, to discuss plans for next day.


Yet again, the forecast was for fog patches; maybe this time they would be right?


At 0717, when we were in the offing, half-a-mile from Ostend, there was barely a zephyr from the southwest. An hour-and-a half later we had to refuel the outboard. Our average speed through the water had been 3.7 knots, but with the fumes from the engine filling our lungs and the tedium of motoring, I can’t say the experience was particularly enjoyable. Other Up River yachts were roughly in loose company with us, i.e., we were not close together. The larger ones gradually pulled ahead until they became dots on the horizon, but reassuringly we all were on the same course. From thereon to ensure our engine didn’t run out of petrol we refuelled every hour. At 0930 the jetties of Blankenburge Harbour bore 130 true.


All that morning there was no respite from the hot sun. We kept a vigilant eye open at Zeebrugge where some sort of construction work was being undertaken at the harbour entrance. All in all, we counted twenty ships in this very busy part of the North Sea, and to the north there was a fog bank that we hoped would not drift southwards.


Just as we were about to have lunch, the silencer of the outboard motor came adrift from its support, which at first alarmed us, but apart from the hideous racket, the engine continued working. Navigation was a matter of motoring from one buoy to the next, as we progressed from buoy ‘W 5’ to ‘W 8’ and so on. We could see Flushing (Vlissingen) ahead, but the tide was strongly against us, and even with the motor on full throttle progress was slow. South of the Harbour entrance there’s a two way passage for shipping; we therefore chose a course that would take us close inshore by the port hand buoys to keep us clear of west-going traffic.


It was with some relief that we made it into the precinct by the main locks and entered them at 1435. Unfortunately, we were too late for the lifting of the road bridge, but meanwhile, a cup of tea went down well. Twenty minutes later the bridge was lifted again. Then we made a hash of it, because we were not smart enough off the mark. Our third attempt was successful. However, as we proceeded to the second bridge, the outboard faltered, because we had failed to undo the air vent! We felt like a bunch of amateurs, for sure, but eventually we got the hang of canal cruising and succeeded in negotiating four more bridges before we arrived at the ‘Jachthaven’, which was right in the heart of Middelburg. We finally berthed at the inner Yacht Harbour at 1840.


Fast tides, bridges and the outboard silencer hadn’t been our only problems, because the jet on the cooker needed cleaning before we could make dinner. By nightfall, everything was in its place and we were snugged down for a quiet night, or so we hoped.
Posted by William Serjeant at 8:42 pm