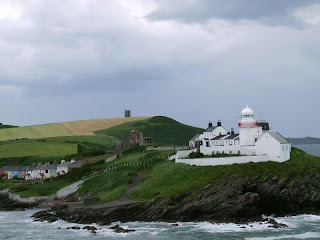 
At 0830 we let go the visitor’s mooring at Crosshaven Yacht Club. There was the faintest easterly wind - just enough for steerageway. We took the last of ebb and drifted towards the entrance of the River. We could hear Roche Lighthouse sounding and guessed there could be fog at sea. Progress was so slow that we took two-hours-and-a-half to arrive at a point near the lighthouse where we anchored for lunch. The fact that we did not have an engine was a blessing; otherwise we would have been tempted to suffer its raucous sound and breathe in copious gaseous fumes. Having accepted the loss of the engine, our attitude to the cruise was simply to relax and let the wind dictate where we would go. In fact, there was no alternative, except to buy a new outboard motor.


While I prepared a mid-day snack, Geoff set about devising an improved self-steering system that entailed using the storm jib, plus a couple of blocks and a spare sheet. As we took in the beauty of the scenery and ate our lunch a school of small porpoises entertained us by frolicking around the boat. A light breeze sprang up, prompting us to sail out to sea for testing the new self-steering system. The crews of the racing fleet, including those aboard a flotilla of Cork One Design yachts, were enjoying themselves. We hoisted our spinnaker and more than held our own with the best of them while trolling for mackerel. Altogether we caught two mackerel and one Pollock before handing the lines. As we did so, a shark broke surface and made a close pass under the stern of the boat. 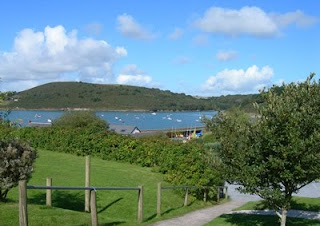 Looking down on Oysterhaven


There’s nothing quite like the smell of fresh mackerel sizzling in a frying pan to whet the appetite, and less than an hour after we caught them, their succulent flesh was falling apart in our mouths. Hours later, we slowly sailed by the entrance of Oysterhaven Creek and continued towards the Bandon Estuary where we anchored at 2020 in three fathoms, south of Charles Fort. It was truly a picturesque and romantic setting that spoke of troubled times in the seventeenth century when the fort was built. At that time there was conflict between James the Second and William of Orange. I’m not conversant with the history, but the star-shaped fort could house a whole garrison with their weapons of war and provisions for withstanding a siege. The magnificent stone fortification had a commanding position overlooking the River towards the less imposing James’s Fort on the other side. Vessels of invading forces trying to gain access to the anchorage at Kinsale would have been vulnerable to attack from those occupying the forts. 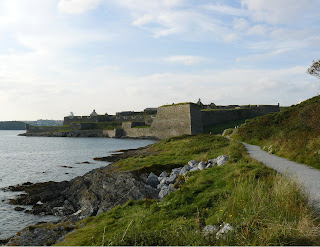 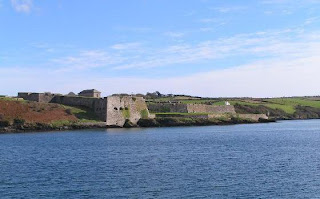 Another view of Charles Fort 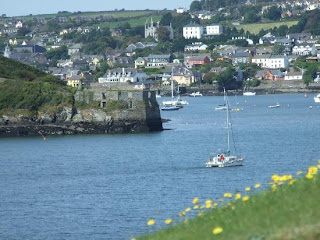 Kinsale as seen from Charles Fort

Uncharacteristically, we woke up late at 0830, but there was no hurry, as we were on a leisurely cruise. We discovered it was a Bank Holiday, and at Kinsale it was Regatta Day. 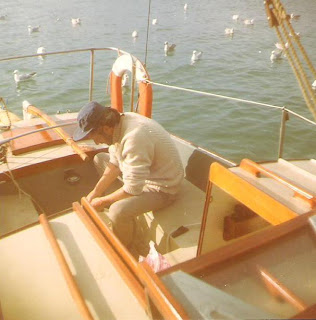 
By mid-day the sky had brightened sufficiently to encourage three lasses to brave the cold water for a swim from a nearby beach. Their shrieks, laughter and antics entertained us for a short while, and when the show was over, Geoff occupied himself by trying to improve his Mark 11 self-steering system. Having played with it to his satisfaction, he suggested we should go for a test sail to find out if it would work. We could also do a spot of mackerel fishing, just as we had done the day before. Well, the modified Mark 11 performed to Geoff’s expectations, but more importantly, we were highly successful at fishing. Pleased with our test sail and the abundant catch we returned to the River Bandon, but instead of anchoring at Fort Charles we continued to the anchorage at Kinsale. Without ado, we inflated the dinghy and rowed ashore to partake of the festivities. Rubbing shoulders with excited spectators we watched the final stages of the Regatta and treated ourselves to locally-made ice creams. Before returning to ‘Pinto’ we did a little shopping and enjoyed an exhibition of amateur paintings and ceramics.
Posted by William Serjeant at 8:49 pm