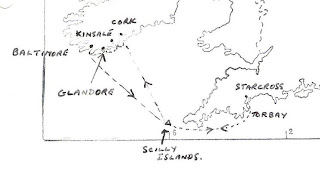 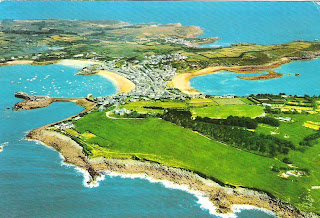 St Mary's seen from the air


We woke up to find a misty morning, but by 0830 when we weighed anchor, visibility had improved. There was more than enough water to cross the Bar. With the outboard running we had ample opportunity to take in the beauty of our surroundings. We left the saddle-like, uninhabited Island of Samson to port and followed a passage marked by beacons northwards towards Bryher and afterwards on a transit to Hangman’s Island. The little village of New Grimsby, complete with a quay and sandy beach was left to starboard. The water was crystal clear so that we could see where the rocks were and judge the depth. A gentle wind from the north funnelled between Bryher and Tresco. With the engine still running we hoisted sail as we passed Cromwell’s Castle on our starboard hand.


When we were in open water we discovered that the wind was a north-easterly, force 2. Taking our departure from a point due west of Round Island and north of Bryher, we reset the log to zero. The time was 0945 and our course was 334 degrees compass. By 1230 we had sailed 11 miles, giving us an average speed of 4 knots. A reciprocal bearing with the DF to Round Island confirmed we were on course. Geoff rigged the boat to self-steer by setting up a sheet-to-tiller system. ‘Pinto’ kept a pretty good course. At 1800 we sighted a ship fine on the starboard bow and by then the wind had increased to a force 5 from the northeast. The ride was quite lively and after our evening meal I noticed that the Seagull outboard was no longer on the transom! The securing pin had somehow jumped out. I felt somewhat guilty, because I was on watch and I had not made sure the engine was tied to the boat. Geoff took the news stoically.


Shortly before nightfall we fortified ourselves with a ‘MainCourse’ soup, i.e, a broth with chunks of beef and vegetables in it. The boat happily continued sailing herself to windward, but the steering compass light failed, which meant we had to use a torch to check our heading.


It was one of those magical nights. Our ship sped along at around 5 knots, and towards the eastern horizon a sickle moon floated on a diamond ocean. Breathtaking phosphorescent waves, one after another, marched in rhythmic unison as a mighty army with glinting swords and shields of silver. The fire and drama of the night was awesome.


To spoil the dream, a ship was sighted shortly before sunrise, but then we were greeted with a ball of golden light which heralded a clear cloudless day. At 0905 the cry went out, “Land Ho!” Over a period of twenty-four hours we had covered 112 miles – not bad for a 21’ boat. 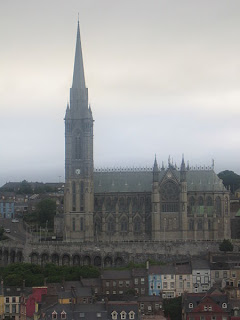 At 1140 we entered Cork Harbour where little boats tacked to and fro and a great passenger ferry made out to sea. An hour later we picked up a visitor’s buoy at the Royal Cork Yacht Club where we were given full use of the Club’s facilities. Later that day we bussed into the bustling City, but how stifling hot it was, and how claustrophobic the streets were by comparison with being on the open water.
Posted by William Serjeant at 2:09 pm