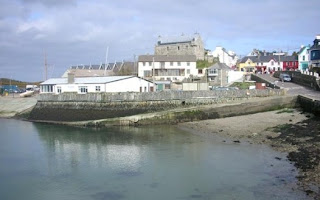 
We slept well, perhaps too well, because we did not wake up in time for the early morning Shipping Forecast, but we were in time to enjoy a superb sunrise. After breakfast we sailed from our secluded anchorage to Glandore to buy milk, bacon, porridge, crisps and chocolate.


By the time we had packed the dinghy away and prepared the boat for sailing it was mid-morning. A force 3 to 4 south-westerly was funnelling into the creek, which gave us an exciting beat out to sea. When we were clear of the land, we found that the wind was coming from where we wanted to go, i.e., Baltimore. At 1153 we were two cables south of Adam Island and set the log at zero. The sky was almost cloudless and the colours were vibrant. We could have sailed well offshore before tacking, but we chose to short-tack along the coast to enjoy the fantastic cliff and island scenery.


About an hour after leaving Adam Island, High Island bore 315 degrees and ahead was a cluster of pointed rocks known as the Stags. As on Tuesday, ‘Pinto’ leaped off the wave tops, but this time she didn’t land on the crests of oncoming waves, instead she repeatedly crashed into the troughs. We were going too fast, but we couldn’t resist the excitement as spray flew over the boat, and now and again waves slooshed over the cabin. At 1423 I made a note in the log that we had sailed ten miles, and as I did so, a huge curler came right over the boat, and a fair amount of water ended up in the cabin. There was an ominous thud before the deluge when the boat landed in a trough between waves after being airborne. A check around the interior didn’t give any indication of damage, but we shortened sail to reduce speed and sponged out the unwanted water. An hour later, when we were south of Kedge Island, we changed course for Sherkin Island which we left to port. Not quite able to goose wing the sails, we exuberantly hared into Baltimore Bay rather too fast for sensible pilotage, arriving at the Cove where we anchored in time for late afternoon tea. 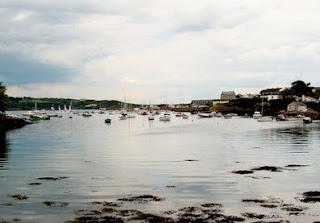 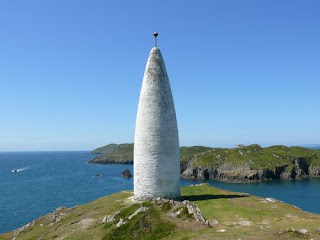 
We quickly pumped up the dinghy and rowed to the slipway for exploring the immediate area and to shop for items we had forgotten at Glandore. Baltimore was truly pretty. After shopping we walked to ‘Lot’s Wife’, more properly named the Beacon, a Day Mark to aid navigation. There we sampled magnificent views over Sherkin Island and Clear Island. On our return to the boat we were invited aboard a miniaturised homebuilt Sparkman and Stephen Saggita, ‘Glory Bee’. Her owner had made a really good job of her using the strip-plank method. We shared an evening meal with him and talked about boats and the sea until midnight. Needless to say, we had had a spanking day.
Posted by William Serjeant at 9:55 pm