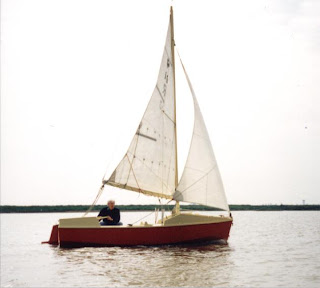 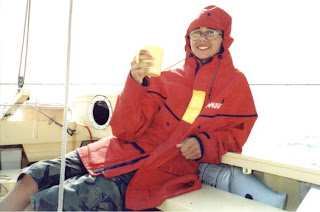 I have a feeling that a few readers may have been bored with my endless log accounts, consequently this ‘Interlude’ featuring my Roamer dinghy, ‘Harriott’ will be brief.


If you live long enough and become married or have a relationship, you may become a grandparent. Of course, you will become a parent first! One of the joys of life is holding a newly born grandchild in your arms. I’ve been blessed with seven grandchildren and three great-grandchildren. Well, the challenge of building a relationship with a grandchild is there for the taking, that’s if you are up to it. Time and circumstances need to be fortuitous otherwise you will not be successful.


During the summer of 1999 I had a weekend break aboard my Roamer dinghy with my Italian-born grandson. I wanted to share time with him and to introduce him to sailing. I had expected he would not be interested, but I was proven wrong. 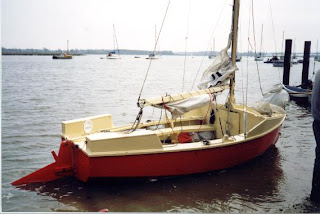 
On the morning of 24th July, 1999 we launched ‘Harriott’ at Burnham Marina. Straight away I gave him the responsibility of getting us out of the marina. He diffidently took the tiller, but within minutes he got the hang of steering. There was only a gentle wind from the south, which meant sailing down the River Crouch towards the sea was an easy matter. The River runs west to east; therefore all my grandson had to do was to point the boat towards the east and try to keep her in the middle of the River.


It was a lovely sunny day, and a good many yachts were out on the water. Our course took us seaward past the usual marks: Inner Crouch Buoy, Crouch, Outer Crouch, and so on until we arrived at Buxey No 2 where there was a gathering of anchored boats – they were all the there for viewing seals lounging on the drying sandbanks of Maplin. As we progressed seaward, the wind backed to become east-by-south, which entailed sailing to windward. Gradually, my tyro crew was taking onboard new knowledge: how to trim the sails, the difference between weather helm and lee helm, heeling, trim, tacking, gybing, port hand and starboard hand etc.


Once again, the direction of the wind changed; this time coming from south- by-west. Small cumulous clouds formed overhead. We headed back towards Burnham. On passing the entrance of the River Roach we avoided a fleet of dragon yachts engaged in racing, and how colourful they were with their spinnakers flying. The inshore lifeboat was speeding into the Roach. Off the Royal Corinthian Yacht Club we were forced to keep clear of a number of Squibs as they jockeyed at the start line. 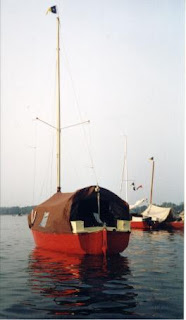 We continued up the River to Fambridge where we moored beside the pontoon, and there we set up the tent. A meal at the Ferry Boat Inn went down very well. That night we slept peacefully.


Early on Sunday morning, 25th July, there was a slight mist rising from the river banks. When breakfast was over and we had packed the tent away we made sail for a saunter up river through the moorings as far as Brandy Hole. I couldn’t get my grandson off the tiller. He just loved tacking the boat through the Fambridge moorings. He had the skill of one who had been doing it for years. He even tried racing other boats as they weaved their way towards Bridgemarsh Island, where terns screeched in protest at yachts close to their nesting site.


The diurnal rhythm of a summer’s day brought an increase of wind from the east which caused us to exchange the Genoa for the jib and put one reef in the mainsail. Having tacked through the Burnham trots we continued to the River Roach where we explored the first reach. By then there was a good force 4 from the north east, so we anchored in the lee at Crow Corner and set up the tent.


At 1810, chips, tuna salad, yoghurt and coffee went down well. It was an evening of reading for me, and a time for listening to the radio for my crew. The sunset was fabulous, although the wind shook our tent. As a precautionary measure I let out more anchor warp. A DCA member with the name David passed by in his Skipper 18. He told us he had set out from Havengore Creek and had spent the day sailing around Maplin Sands.


There is no further record in the logbook, but on Monday morning we returned to Burnham Marina. Together, my grandson and I had shared a precious interlude, a time between times, which we shall always remember.
Posted by William Serjeant at 5:33 pm

Hi Bill
I love the look of Harriott; great work.
I've just stumbled across the Roamer dinghy and would love to build one.
But, I've never built a boat before, hence I come seeking your advice please.
Can you please tell me is 'stitch and glue' now the most normal/best way to build such a boat or should I be contemplating traditional construction?
Thank you very much for your help; all the best for 2014.
Kind regards
Adrian McCallum.

This reply to your comment comes over 4 years after you made it!

A few 'stitch and glue' Roamers have been built. Paul Fisher drew up plans for such a version.

I'm posting photos of a stitch and glue Roamer in an article to be made live on 31st November, 2014 - Roamer Dinghy - Part 2.