After our exploits of yesterday we were not in a hurry to rise, but when we did, our priority was to sort out the interior of the boat, because it had become very wet and soggy. We didn’t finish breakfast until 1050, and by the time we were ready to get underway it was 1115. Constant drizzle didn’t inspire us, and the light wind was hardly helpful, except it was coming from the west. A submarine was at anchor in the Roads, which caused us to remember that we should keep a lookout when passing through submarine exercise areas. As usual, we threw fishing lines over the stern, and we were not surprised to catch a large Pollock and a mackerel in the vicinity of the Spanish Ledge Buoy. With the spinnaker drawing, ‘Pinto’ was able to make over the tide, and at 1230 we set the log at zero as we took our departure from Peninnis Head. Our heading was 100 degrees true. The sea was smooth, and two other yachts were leaving the Islands at the same time. Thankfully, the drizzle had stopped. An hour later when we were having lunch, (bread with lashings of jam, marmalade and honey) we noted that the log showed a reading of 4 nautical miles.


Over the next few hours we clocked a fairly constant speed of 4 knots which brought us close to the Wolf Rock Lighthouse at 1750. We had no idea where the other yachts had gone, because each had headed off in different directions after leaving the Scillies. Our progress was good, so that by 2120 the Lizard Lighthouse bore 150 degrees, about half-a-mile away. Half-an-hour later in the gloom of dusk, we were met by a flotilla of racing yachts sailing to the southwest; their crews were sat along the side decks. We could only think they were Fastnet Racers.


In the early hours of the morning our speed through the water was a measly 1.8 knots, and having rounded the Lizard we could not make sense of the various lights. At 0400 we changed the spinnaker for the Genoa, but before doing so I had to climb the mast to retrieve a plastic chafing tube that had jammed between the top of the stay and the head of the mast. The time for climbing the mast was opportunistic, because there was little motion on account of the smooth sea and hardly any wind. The anti-chafing tube should have been at the bottom of the forestay to minimize chafing of the spinnaker. The tube had been split from top to bottom so that it could be threaded onto the forestay. Normally this anti-chafing device was effective.


Because we could not establish the yacht’s position with reliability we hove to until daylight. When we were satisfied as to where we were, we set sail for Falmouth. As was our custom, fishing lines dangled over the stern and mackerel were being taken in by hooks baited with silver foil from the tops of milk bottles. (Yes, there were glass milk bottles in 1975) We caught several fish with a view to giving them to mutual friends who lived near Falmouth. Reaching northwards past the Manacles Rocks was a satisfying experience, because we were on the homeward passage. In a couple of days, if the wind played ball, ‘Pinto’ would be back on her mooring at Starcross. Altogether our little ship had sailed sixty-eight nautical miles since leaving the Scillies. 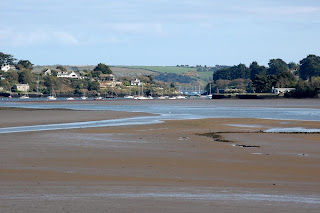 
Falmouth Harbour is one of the finest natural harbours for deep-sea vessels in the world. Pendennis Castle, high on a mount to port, marks the western side of the entrance and St. Anthony’s Lighthouse pinpoints the eastern side. From between the two, a course due north will take you past Falmouth Docks on your left and the pretty village of St. Mawes to your right. Next there’s Mylor Creek to port and St. Just-in-Roseland to starboard. Our destination was a little further north, on our port hand: Restrongate Creek, which has a very narrow entrance. Much of the Creek dries out at low water to reveal acres of soggy mud. Our friends have a bungalow at Devoran, which is almost at the head of the Creek. At the time of our arrival the wind was light and fluky which made picking up a mooring a little tricky. Having succeeded we relaxed while taking a late morning coffee before inflating the dinghy to row ashore. There were no mobile phones in 1975, and the only way of contacting our friends was to walk to the nearest red phone box. To our surprise we realised we were still dressed in our oilskins, although the sun was shining! We had been so preoccupied with working the boat that we had not noticed our discomfort because of the heat.


It was no wonder that we were invited to have baths before dining with our friends! I guess we stank. I must say, the menu did not include mackerel! So as not to get stuck in Restrongate Creek we returned to the boat and made sail at 2020. The wind soon died, but not before we managed to grab No. 3 mooring buoy before it petered out. The buoy was meant for large seagoing vessels and it was totally out of scale for ‘Pinto’. Why we did not think of anchoring I cannot imagine. That night our yacht repeatedly bumped against the unforgiving object, which prevented us from having proper sleep. I confess to being a little lazy by not helping out in trying to place fenders during the early hours to minimize damage to ‘Pinto’. 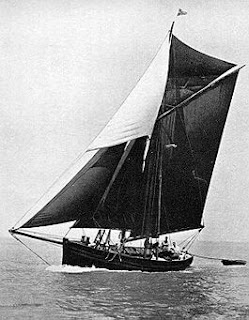 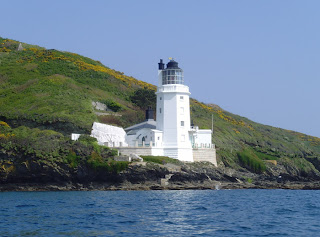 
There was reluctance on our part as we made sail at 0725, because the dank mist was very uninviting and we were zonked by the lack of sleep during the night. We could hear the siren of St. Anthony’s Lighthouse and expected there would be poor visibility at sea. Our lack of enthusiasm was more evident when fine rain started to fall. However, there was a good force 3 from the southeast which meant we would be able to set up the self-steering system and retire below. The person on watch would be able to take a peek out of the hatch now and again to make sure there were no fishing floats around or other hazards. We made our departure from St. Anthony’s Head at 0900 and set the log to zero. We were privileged to see ‘Dyarchy’ at close quarters as she entered Falmouth Roads. She was an early twentieth century yacht that had been styled on the lines of a Bristol Channel pilot cutter. Roger Pinckney commissioned Jack Laurent Giles to design her as a private yacht. She was built in 1939 by Swedish boat builders.
While I took the first watch, Geoff snugged down in his sleeping bag. Between taking peeks out of the hatch I read the ‘Yachting Monthly’. By 1430 ‘Pinto’ was prancing along like a true thoroughbred. She was south of the Eddystone Lighthouse and may have believed she was passing the winning post, but there were a good many miles to go before we would tie up to our Starcross mooring.


One of the attractions of being at sea is coming into contact with those who make their living from it. I always admire fishermen who spend their working lives seeking a harvest. They put their lives at risk for the sake of their families. A more dangerous occupation is hard to imagine. Stormy weather and the hazards of their work cause many to lose their lives. Yachtsmen have a choice - they can choose whether to go to sea, but fishermen must earn a living. Therefore I was intrigued to watch at fairly close quarters fishermen working on their small trawler. They had hauled in their net and were in the process of gutting their catch while hundreds of gulls scavenged from offal being thrown into the sea. The scene had all the ingredients of a fine oil painting as interpreted by a talented artist; there were the variegated colours of sea and sky contrasting with the trawler’s black, salt-stained hull. As she moved through translucent green water, a curling white wave from her bow was flung outwards; sun glinted off yellow oilskins, black puffs of smoke trailed from her exhaust and her tanned mizzen bobbed at her stern.


We missed the evening Shipping Forecast and when we checked the log at 1800 we discovered it was not rotating. The spinner was embalmed in weed. An hour later, the wind was so light that ‘Pinto’ almost came to a standstill, but she just managed to maintain steerageway. However, from 2200 the flood tide assisted us in the direction of Salcombe.


You’ll note that it was our practice to keep pressing on throughout the night, rather than putting into port, but that night we made little progress. We should have been content with anchoring in shallow water. 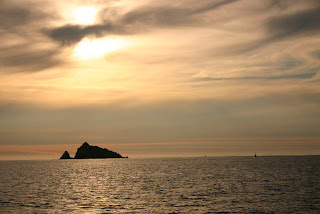 
Early in the morning we couldn’t resist trying our luck at fishing again. We just couldn’t get enough mackerel to satisfy our appetites! I lost count of how many we had caught while on our cruise, but within twenty minutes we caught another four, which was all we could eat. Dartmouth Day Mark was shrouded in mist, but the land below was quite visible. At 0715 ‘Pinto’ could just hold her own against the ebb that was running around the Mewstone. 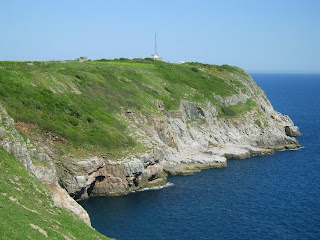 
Two hours later as we approached Berry Head the sun shone brightly. There was so little wind that it took us all afternoon to creep across Torbay, but from there on, the wind freshened from astern and the spinnaker effortlessly hauled us to the Exe Bell Buoy. The reach along Exmouth seafront against the ebb was just doable. As an incentive to get the best out of the boat we joined in an impromptu race with another yacht. Eventually, her skipper had enough, turned on his engine, downed sail and kindly offered us a tow, but our stupid pride prevented us from accepting. On the other hand, maybe we hadn’t been proud; perhaps we just wanted to complete the cruise under sail? Whatever the reason, we knew we had enjoyed a wonderful holiday, and after picking up ‘Pinto’s’ mooring at Starcross we grinned at each other with satisfaction.