Bees and their Extinction 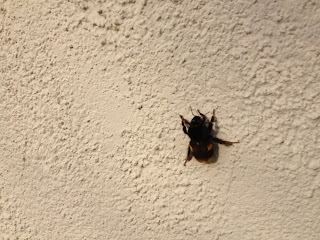 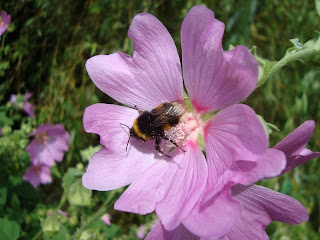 In November of last year I wrote a blog about Pollination and the important part bees play in it. I was concerned that I had only seen one bee throughout the whole of 1012. I happened to take a photo of that solitary bee collecting pollen from a flower in my garden.
A week ago when we had the snow, I saw a bee clutching the rendering on a wall of my house. It was an incongruous sight; the creature was immobile while trying to warm itself in the fleeting sunshine. I wondered if perchance it could be that very same bee I had photographed before. I took another, but comparing them, I think they are different.
If you are concerned about the extinction of bees, there’s still time to sign a petition for banning neonicotinoid pesticides throughout the EU. The European food safety watchdog recognizes that this pesticide is fatal to bees. A 1.2 million petition for banning it in the US has led to the opening of a formal consultation on pesticides.
If this destructive pesticide is banned from the whole of the European Union, there’s a chance that the rest of the world may join in.
The first link below takes you to the online petition.
Links
AVAAZ.ORG
http://www.avaaz.org/en/hours_to_save_the_bees/?wSKQKbb
Bayer Kills Bees
http://bayer-kills-bees.com/
Pollination
http://bills-log.blogspot.co.uk/2012/11/pollination.html
Media Briefing - Bayer’s Pesticides
http://www.foe.co.uk/resource/media_briefing/bayerspesticides.pdf
Germany Bans Chemicals linked to Honeybee Devastation
http://www.mindfully.org/Pesticide/2008/Clothianidin-Kills-Bees23may08.htm
Posted by William Serjeant at 8:04 pm