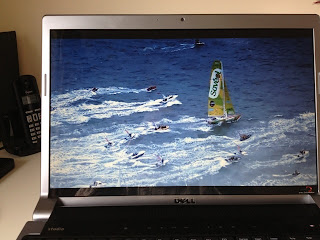 Samantha Davies's 'Saveol' at the start of the Vendee Globe race 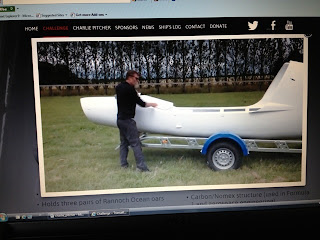 Charlie Pitcher
Of interest to me and perhaps you, there are five topical maritime events taking place: The Vendée Globe around the world single-handed yacht race; the Shackleton Epic Adventure, which is a re-enactment of Shackleton’s remarkable 800 nautical mile voyage from Elephant Island to South Georgia; the Oceanus Rowing Atlantic Speed Crossing, a team of 6 men aiming to row across the Atlantic in less than 30 days; Transatlantic Solo, Charlie Pitcher’s attempt at rowing across the Atlantic with aim of beating the world record time of 40 days, 9 hours and 44 seconds, and Pete Goss’s Big Kayaking Adventure, his attempt at kayaking around Tasmania.
I’ve been following all of these great adventures. Coming to a climax is the Vendée Globe Race that has seen a lot of action. Francois Gabart, aboard ‘Macif’, is predicted to be the winner expecting to cross the finish line early on Sunday morning. Alec Thomson, aboard Hugo Boss, is hoping for third place. There’s been much drama in the race, not least the loss of the keel of Jean Pierre Dick’s ‘Virbac Paprec 3’, who continues to race and currently holds third position.
The Shackleton re-enactment is a bold adventure with Tim Jarvis as team leader aboard a replica of Ernest Shackleton’s improvised 22.5 foot wooden boat that he and five other men sailed and rowed between Elephant Island and South Georgia where they landed and scaled mountains to reach the whaling station at Stromness on the other side of the island.
The Oceanus Rowing Atlantic Speed Crossing is in its 11th day. They are endeavouring to break the outright record for rowing the Atlantic which currently stands at 32 days. They are aiming to do it 30 days or less.
The remarkable Charlie Pitcher is up for breaking his own record time for rowing the Atlantic. He has what he believes to be the best possible boat for achieving his goal. He has previously rowed the Atlantic in 52 days, setting the record for the fastest Brit. Charlie is hoping to set off from La Gomera on Monday, 28th January, depending on the weather.
Finally, Pete Goss, that great adventurer who has taken on many maritime challenges, including the 3,500 mile Route du Rhum race; a voyage aboard the ‘Spirit of Mystery, re-enacting a voyage from the UK to Australia in an open lugger, and now he is more than halfway around Tasmania paddling and sailing his kayak in an anti-clockwise direction.
These guys are all achievers; some would say superheroes. Here are links taking you to their respective websites, and two articles I have written about Vendée Globe and one about Charlie Pitcher.
Enjoy.
Links
Vendée Globe
http://www.vendeeglobe.org/en/
Shackleton Epic
http://shackletonepic.com/
Oceanus Rowing Atlantic Speed Crossing
http://titanrow.com/
Atlantic Solo
http://transatlanticsolo.com/home/
Pete Goss Kayaking around Tasmania
http://www.petegoss.com/
Pete Goss, Route du Rhum
http://www.petegoss.com/routedurhum/index.php
Vendée Globe - Around the World Race
http://bills-log.blogspot.co.uk/2012/11/vendee-globe-around-world-race.html
Vendée Globe - Around the World Race – Part 2
http://bills-log.blogspot.co.uk/2012/11/vendee-globe-around-world-race-part-2.html
Charlie Pitcher to Row the Atlantic Again!
http://bills-log.blogspot.co.uk/2012/11/charlie-pitcher-to-row-atlantic-again.html
Posted by William Serjeant at 6:24 pm