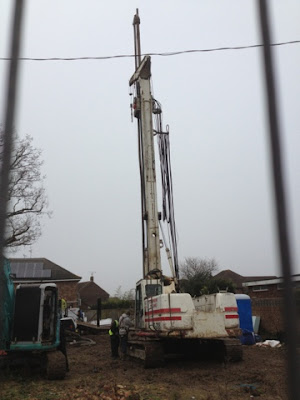 I often walk between my home and the centre of the village, and as I do, I notice changes to the landscape. There used to be a bungalow at a corner by a mini-roundabout. The property was allowed to deteriorate until it was in danger of falling down. The only reason it didn’t collapse was because there was a covering of ivy and other growth holding it together. Within the hedged and fenced perimeter there were several dilapidated, rusted cars and vans.
Without warning, a time came when the vehicles were speedily removed and bulldozers flattened the unsightly landmark. It was a shock to me, as I was accustomed to the ugly feature that had often caused me to ponder how the couple who lived there could accept their situation. That part of the village was vastly changed by the demolition. Instead of dense foliage and an umbrella of trees there was an open space. A place of shadow was transformed into a place of light - not that it was wonderfully attractive, because of rubble, twisted pipes and conduit littering the ground.
Curiosity caused me to speculate what might happen to the land classified as ‘brownfield’, i.e., a site previously built on, often industrial, ready for redevelopment. Rumours were ripe in the village for another mini market. In competition with the Co-op a new Sainsbury's convenience store recently opened, and a Costcutter, too.  What next? Surely, the Council would not give permission for yet another store!
Today I walked to the village, and to my surprise, there was a drilling rig in operation at the corner site. They couldn’t be drilling for oil, could they?  Out of curiosity I took note of the wording on the side of the rig: ‘Cannon Piling’. Immediately, things were put into perspective. Work had begun on building a new property, most likely a large house, as is the norm these days. Small houses are seldom built, because there's less profit to be made from them.
Time will tell, but I feel sure it will not be a TESCO superstore.
Links
Cannon Piling
http://cannonpiling.co.uk/
Brownfield Sites
http://www.sustainablebuild.co.uk/BrownfieldSites.html
Costcutter
http://www.costcutter.co.uk/
Sainsbury’s Convenience Stores
http://www.sainsburys-convenience.co.uk/index.html
Posted by William Serjeant at 10:14 pm